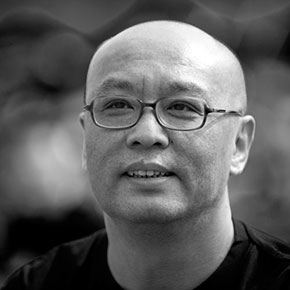 Zhang Xiaogang is internationally recognized as one of China's most talented painters. For more than a decade, Zhang has been painting an evolving series of oil paintings based on old family photographs taken during the Cultural Revolution. The series, "Bloodlines: Big Family," began in the early 1990s and has become his trademark style. In 2007, one of his paintings sold at auction for $3.8 million, one of the highest prices ever paid for a work by a living Chinese artist. After graduating from the Sichuan Academy of Fine Arts in the 1980s, Zhang was one of the leaders of the so-called "Sichuan School" of painters who specialized in surrealistic, folkloric and deeply psychological works. Later, he developed a more subtle and colorful style, painting what he calls "false portraits" that explore the tension between the public and private lives of people in China during and after the Cultural Revolution. In his work, Zhang makes clever use of shadows, blurred edges and watery eyes in his characters. The characters often have identical facial features, hinting at the collective nature of the Chinese family and culture.

Now he lives and works in Beijing

"Bloodline: The Big Family 1997", the Art Museum of Central Academy of Fine Arts,

"Waiting on the Wall: Chinese New Realism and Avant-Garde in Eighties and Nineties, Groningen Museum, Groningen, The Netherlands

"The Blossoming of Realism – The Oil Painting from Mainland China since 1978", Taipei Fine Arts Museum, Taipei

"In Memory: The Art of After War", Sidney Mishkin Gallery, New York, U.S.A.

"The Guangzhou Biennial: Oil Paintings from the 90’s", Guangzhou, China