Wu has been extremely interested in capturing life on the plateau and thus he has visited there more than 30 times since his first trip in the 1980s. He keeps climbing on this plateau to pursue the purity of art and life as well as the interdependence of man and nature, creating a unique spiritual world of art. Whether from his prints, drawings, sketches or his watercolors, ink paintings, he comprehensively and profoundly presents the magnificent snow-covered scenery of the Qinghai-Tibet Plateau, vividly displaying the honest and kind-hearted folk customs of Tibetan people while assuming a rarely seen “spiritual home” in the rapidly developing modern society. His works including “After the Snow”, “Slaughter of Sheep”, “Feeding Horse”, “Two Tibetan Children”, “Milking the Cows”, “Qinghai-Tibet Plateau”, “Highlands Ranch”, “Young Boy” and his other lithographs have become the representative works in the modern history of modern Chinese printmaking; his recent watercolors such as “ Young Man Named Gebu”, “Jieke”, “The Youth Named Dage from Zeku”, “ Two Herds of Gande” “ Portrait of Kaduo”, “ Unfinished Portrait of a Youth” make a new interpretation of human beings and humanity to expand new possibilities for watercolor sketching. 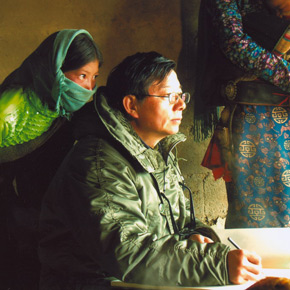