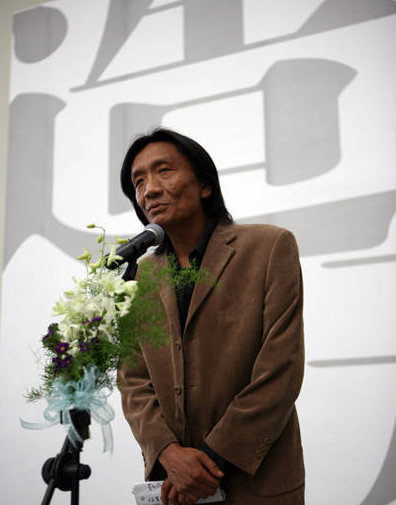 Nonetheless, no matter how his perspectives change and whatever his attitude may be towards the figures in his paintings, be it respect, critique or pity, there is always an underlying compassion in his work. In revealing the relationship between man and society, the works suggest a certain suspension, or even anxiety. The reflection on the reality and on man in his paintings is rather from the perspective of fate, than from a moral perspective. Certainly, that is not merely a fate that concerns one single individual Chinese, but all men floating in this "floating world".

Born in Jining City of Inner Mongolia, Su Xinping drew in primary school and was identified as a talented student. He was accepted into the Tianjin Academy of Fine Arts in 1979 then continued to paint while in the army for two years, ultimately choosing art as his life’s work and this experience that inspired his earliest lithographic works of nostalgic and quiet scenes of vast grasslands and unchanging people. Growing in a period when art was still commissioned as propaganda, Su wanted to keep a distance from politicized art, directing his attention feelings about life and time. Following completion of his study at Central Academy of Fine Arts in Beijing in 1989,  he began to work with intimate black-and-white depictions of social transformations during the decade of open policy promoted by Deng Xiaoping, expressing his deepest concern for the issues of isolation and lack of communication among people emerging in the new course. Su has exhibited worldwide, featuring in shows like ‘Faces and Bodies of the Middle Kingdom’ at the Galerie Rudolfinum in Prague (1997) and ‘Inside Out: New Chinese Art’ at the Asia Society Galleries in New York (1998). Su Xinping established himself as a printmaker, his printmaking allows people to place work in their homes; it is economically important to him.

Though challenged by the time and energy required to teach, Su Xinping taught at the Fine Arts Department of the Normal University of Inner Mongolia (1983) and continues at the Central Academy of Fine Arts (CAFA) in Beijing. His students do written work so that he can understand their thinking and feelings. Generated by Su Xinping’s passion for the grassland of Mongolia, his affection and reverence for the earth and sky, he encourages his students to pay attention to the environment and to put it in artwork. By means of a smooth and controlled technique he completed Dialogue in 1990, a subject repeated also in 1998. This work reflects the artist’s position in the art trends of the early 1990s, when Cynical Realism was saturating art with feelings of solitary spiritualism, loss of cultural identity and restricted freedom (in whatever sense). Challenged by the increasing pressure posed by the accelerated economic growth, Su’s works of the mid and late 1990s present an in-depth critique to the related psychological concerns, as in the Sea of Desire series. Here he depicts the dissatisfaction and unattainable character of desires in a fast-developing society approaching an open market model of pluralism. Su was nominated as candidate for the UNESCO Award for the Promotion of the Arts in 1993.

1998 Inside and Outside, Chinese Art from China and Australia, PLIMSOLL Gallery, Tasmanian Academy of Art, Herbert, Australia

1997 Inside and Outside: Contemporary Chinese Art, LASALLE-SIA Academy of Art, Singapore