Born in 1963 in Beijing, Yin Xiuzhen is one of the leading figures in Chinese contemporary art, and an avant-garde installation artist, mirroring the environment around her, currently she lives and works in Beijing. She began showing her work in the late 1980s, around the time she graduated from the Department of Oil Painting, Beijing Capital Normal University with a B.A. degree. Her work has been shown extensively in various international exhibitions since then. Best known for her artworks that incorporate second-hand objects, Yin uses her works to explore modern issues of globalization and homogenization.

Since the mid 1990s Yin Xiuzhen has created artwork in response to the massive destruction and reconstruction in Beijing. Through various types of intervention, Yin Xiuzhen seeks to personalize objects and to allude to the lives of people affected by sudden social, physical and cultural change. Memory, the past and the present, external appearances and internal responses are strong themes in her works. The outdoor project Washing the River (1985) was a particularly important step for her. In this work, part of a project in Chengdu, she made a lump of ice by freezing water from a polluted river and then washed it with clean water. Writing about this work, the critic Li Xianting has suggested that this created an occasion for her to learn to create an artistic language through an interest in her own living environment. In Dress Box of 1995 she expressed her interest in working on a larger scale by using materials with personal associations. Speaking about her work that contained memories of her own life, she said, “Hard things and soft things, coldness and hotness, reason and feeling, the combinations of these antithetical things create ineffable feelings”. Yin Xiuzhen gathered old clothes donated by people living in the outskirts of Beijing. She washed the clothes and hung them to dry in a discarded pagoda. The wet clothes dripped onto mounds of plaster of Paris which absorbed the water to form cement. The community supported the artist´s recycling statement. For Beijing 1999, she used ceramic roof tiles rescued from the domestic demolition sites, coupled with photographs of ordinary people. As a symbol of “Old Peking”, it was used to cap the roofs of traditional, single-storey courtyard-houses (siheyuan) in which the majority of the local population once lived. In recent years, entire inner-city neighborhoods have been bulldozed to make way for new multi-level office buildings and the residents moved to high-rise accommodation in suburbs outside the city. In Cemented Shoes (1995), one sees the artist´s concern with her living environment and society very clearly. In Cemented Shoes, twenty-five pairs of shoes, once worn by men and women of all ages, hardened by cement, are hung in a row by hemp rope from the ceiling. There are many kinds of shoes, from the cloth Chinese shoes, now seldom seen, that were popular in the sixties and seventies to the most recent fashionable shoes. By looking at these shoes alone, one can get an interesting glimpse of the changes in Chinese society over the last few decades.

Yin said, “I had exhibitions abroad and was on the road much of the time. At airports I saw the luggage that all the people from all over the world were carrying, and I imagined that these suitcases represented their homes in a certain way.” On the basis of these deliberations, Yin created the series Portable Cities (2002-2012), consisting of opened suitcases that reveal mini-cities made of textile. They were on display in Shanghai (2002), New York(2005), Berlin(2006), Melbourne(2009), and Groningen and Düsseldorf (2012, her biggest solo exhibit in Europe), etc. She is still an active artist, recent works include Collective Subconscious (2007), Engine (2008), Weapon (2003-2007), and Thought (2009).

About her favorite materials, Yin said: “Clothes say a lot about a person. At a single glance they recount how big a person is, his or her age, style, gender and income. But they also narrate invisible information such as the memory of a certain period when the piece was worn, and the reason why it was kept.” Feminine her works are, but different from the feminist in the general sense, Yin Xiuzhen is gentle rather than having a sharp confrontational attitude, she indirectly cares for society. She conveys a sense of change, which is based on personal history, touching society through her will and spiritual feelings for a private life. 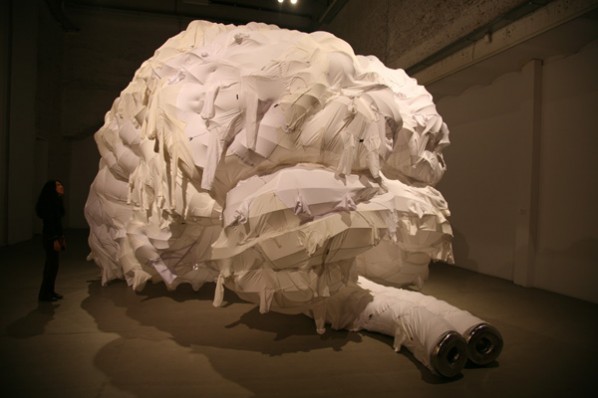 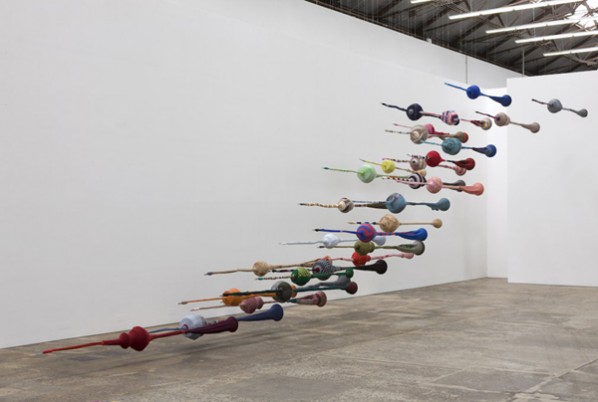 2006 “China – Between Past and Future“, House of World Cultures, Berlin, Germany

2006 “Between Past and Future”, The Victoria and Albert Museum, London, UK

2005 “Between Past and Future“, Museum of Contemporary Art, Chicago, USA

2005 “Between Past and Future“, Smart Museum, Chicago, USA

2005 “Between Past and Future“, Victoria and Albert Museum, London, UK

2005 “Between Past and Future”, Seattle Art Museum, Seattle, USA

2004 “Between Past and Future”, International Center of Photography, New York, USA

2003 “Home and Away: the New Globalism”, Vancouver Art Museum, Canada 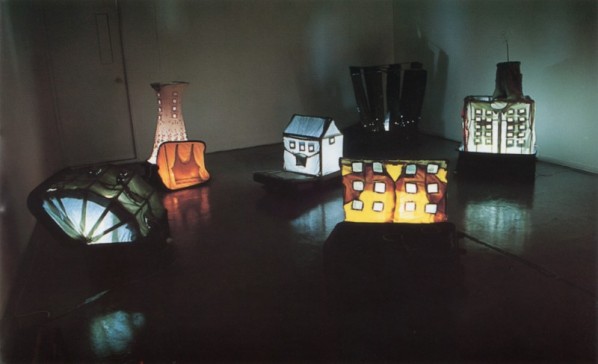 1999 “Transience: Chinese Art at the End of 20th Century”, The Smart Museum of Art, Chicago, USA