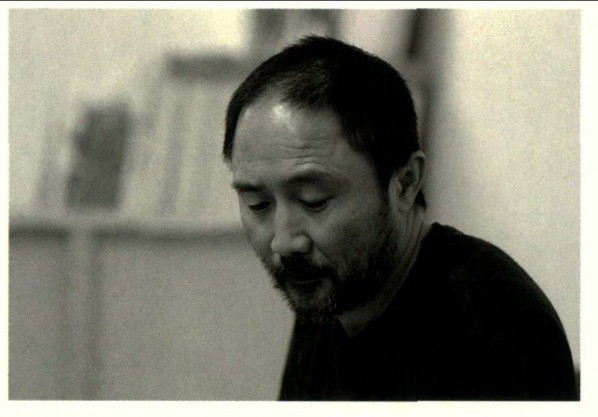 “Chinese master Tao-Chi spoke of the single brushstroke as the origin of all existence; this is the fundamental structure of my practice. In my abstract paintings, I intend to express both vitality and human consciousness through the application of bold, yet spontaneous marks. In this simplistic process, I intend to capture an unadulterated moment within the larger framework of human existence. The strokes are not depicting but translate the abstract notions of comfort, joy, straightforwardness and faithfulness, while performing a body of gestures that visualize a sense of ultimate reality. I have often been inspired by transitional moments within day to day life. Rather than settle on those resolutions that we aspire to achieve, my works intend to explore the unresolved space in between; in this way, viewers are asked to momentarily abandon the confines of daily life in order to subject themselves to a less concrete reality, one that is full of experiential and emotional potential.”

“My painting is neither a fashion thing, nor the appearance of a thing, looking for a unique way to express my mind while aware of an Oriental cultural spirit once again. Chinese calligraphic ink-and-wash operation pattern and the psychological pattern of Chinese character structure is the basic clue to his abstract artistic exploration.”

“It’s necessary for me to eradicate the most rigid and restricted thing in tradition, in order to re-experience and pour a new spirit into it. Thus, either the audience or I can examine the carefree and elegant live brush and ink, experiencing a spiritual state that stays away from the scene of contention. And it’s more important that its production process releases the irreversible and unrepeatable randomness of fresh life. It is different from Western painting tradition when artists portray the objects, struggling and venting in language and personality again and again, with the arrival of the goal by repeatedly producing.”

The long-term overseas survival environment and artistic exploration is an opportunity for Burigude to review his own culture, he has been searching for and create a “carrier that is appropriate to personality and psychology as well as cultural experiences”, excavating it from visual cues, he is indulges in Chinese calligraphy, Chinese calligraphic ink-and-wash operation patterns and a psychological pattern of Chinese character structure that becomes the basic source of his abstract artistic exploration, while Chinese brush and ink evolves into an arrangement of abstract brushstrokes, where he begins to try abstract language and create a style.

“Whether you apply a Chinese traditional way or apply a Western traditional way, it’s possible that you will be thrown into the trash can. Although you are close to or even beyond some masters, they will think you are short of creativity, which does not make sense. But in traditional Chinese culture these artists are considered to be knowledgeable. Clement Greenberg, founder of American modern art theory said: ‘If you want to change your art, change your methods’. The so-called ‘create’ generally refers to a change of the carrier of the artistic concept, this is at least the method. Changing carrier and method at lease produce new visual experience, which might change the whole conceptual level. When I use an Oriental spirit to hit them, Western culture also opens me.”

Starting from prints, Burigude opened a new understanding of painting, the production process of serigraphic works on the boundary between painting and print, which is done through mixed material, the marks of the temporal, the temperature of color, as well as porosity of serigraphs have been vividly demonstrated, in addition, dyeing, a unique Chinese ink painting technique, as well as brushstrokes of Chinese calligraphy, which reflects on the “twists and turns” graphic brush tracks which is poured into prints by the artist, the brushstrokes are as black as ink, filled with a subtle sense of breathe, accompanied by looming warm color, strokes reflect various directions with an elemental rhythm (a work entitled “Five Elements”), so that the screen is full of the charm of shock. It seems that prints are the rubbings of Chinese ink paintings. His printmaking practice is the discovery of the possibility of a new painting.

He is a determined, tenacious artist that values temperament, the use of color reflecting a delicate and sophisticated effect, Burigude’s abstract works are mostly colored in black and white, he believes that the simple color is feasible to explore the most essential emotion and life, and is the best way. Some yellow or red bright dots are embellished in the black and white, in between thickness and thinness, brightness and darkness, smoothness and obstruction, the artist injects a temperature – which inflects all people. He provides a moderate emotion, the most minimalist nutrition, a mutual-referential rich territory, including the structure of screen, arrangement of form, attracting each other, exuding “implication” in the confrontation.

“In my opinion, the original state refers to the throwing away of all the concepts of value brought by the educational and objective factors, it will be a naked mind, which will never be blocked by any objectiveness and randomness. I believe that the happiest time for an artist is drawing alone without the participation of others, as long as it is relatively pure, it is original. Throwing away the traditional cultural values to create a form of fully natural painting, in this process, it also includes our cultural experiences and spiritual content, which is the ideal state in my opinion.”

“No matter what new things appearing in the world, we are able to find a clue in our own culture. Just like before the Americans and the Russians went to the moon, Chinese had a story of the Goddess Chang flying to the moon. It is a process starting from fantasy to thinking, and practice. It is a process of materializing a spiritual experience. But Chinese would not like to realize a fantasy. Artistic and cultural prosperity of a nation initially depended on the rich imagination and pursuit of fantasy, which includes science.”

“The inner spirit is the essential thing of artistic form, which will never die. Any kind of form is a language of statement itself, the expression of a spirit which is the criteria for death or living. China is the land of realistic art, as other visual languages are hardly known by the public, once the images disappear, the audience will be puzzled. People should really see this kind of form with their own eyes, which produces spiritual experiences such as pleasant, fun, comprehension, etc. With the improvement of a material life, spiritual demand, the public would gradually accept a variety of art forms.”