Wang Huaxiang graduated from China Central Academy of Fine Arts in 1988, his creations of chromatography woodblock print “People from Guizhou” without a main board make people who are moved by painting feel awed. The sketch of “Japan Pagoda tree” perfectly combines indulgent lines and an agglomerate shape which express himself. Following on from this he created the People from Guizhou series, the Close Quarters series (portraits of young and middle aged teachers from China Central Academy of Fine Arts) of black and white woodblock, chooses themes, respecting the accidental and instantly recognising the early woodblock skills which help him to quickly play a role in art circles. In 1994, “Following the Wrong” was published, which was an important event in academic circles at that time, he used serious and understandable words to expound his carnival of illusion as well as an accurate and concise reinterpretation and positioning of the previous classic works. It triggered a profound contention. For a time, due to the hype by the media as he was an active printmaker, Wang Huaxiang became a reference in Chinese fine art education. When there was a coexistence of objection, slander, praise and worship, he sneaked into his own studio, opened a new exploration, and created some ridiculous paintings – it is the individual version that is a combination of imaginative lineage with thought and revision of the present emotional desire. His important work is a self-portrait where he drags his right leg, a hand squeezes the wrinkles on his face. Smooth and solid sketching, offers the audience a question on the comfort of color. He is too sincere to cover any defect. His printmaking creation of the time was more free, “Open the Mind”, “Chinese Schema” (originally named ‘Hardship without Complaint’) established his high status in the field of woodblock printing . Mighty waves crash on a sandy shore, due to his following of drawing and printing across the nation, he takes first place in the reformation of traditional education (with an individual system). 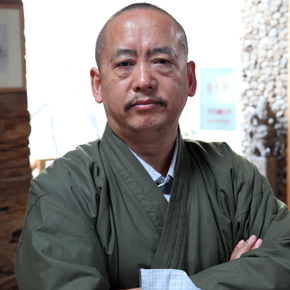