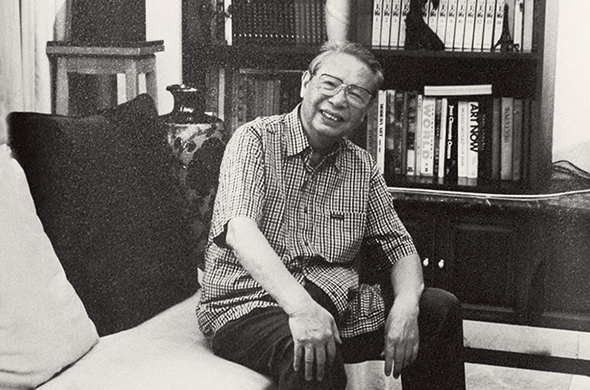 Seen from the working experience on the frontline of the “Woodcut Working Crew of the Lu Xun Academy of Art and Literature,” the art of woodcut is gradually accepted by the masses, it is a mutation in process, it is actually the sinicization of woodcut which replaces the European influences.

– An excerpt of “Luo Gongliu: The Source of Life and the National Form – on Creating an Experience of the Woodcut Working Crew of Lu Xun Academy of Art and Literature”

To learn oil painting, the first thing is to train a pair of eyes for painting oil painting. Oil painting takes color as the artistic language to express, therefore, one must be good at observing color, and this kind of training is a basic skill, which is like a singer practicing singing.

– An excerpt of “Luo Gongliu: Talk about the Study of Oil Painting”

Luo Gongliu was located in the core of an era, but he kept the pure mind of theartist forever, when he talks about the work, as well as the loyal and faithful in his memories, it draws tears.

– An excerpt of “Wu Guanzhong: It Draws Tears from Me Listening to What You Say – Reading ‘Luo Gongliu’s Art Dialogue”

Luo Gongliu is an important oil painter after the founding of new China, his creation of historical painting has been recorded, in the work “Chairman Mao in the Jinggang Mountain”, it combines landscape with Chinese ink and wash, to explore the fusion of Chinese and western culture in the language of painting, and also successfully shapes the image of Chairman Mao and the scenery of the Jinggang mountain.

– An excerpt of the former President of CAFA, the famous oil painter Jin Shangyi’s speech at the “Teaching and Academic Seminar of the One Hundredth Anniversary of Luo Gongliu’s Birth”

Luo Gongliu combined the folk woodcut New Year paintings and western printmaking, namely combining revolutionary art with popular art, to create an art form that the ordinary people love to see and hear. When the new China was founded, Luo Gongliu mainly focused on two aspects: the creation of revolutionary historical themes, among them, “Tunnel Warfare” was a ground breaking work. In addition, he focused on the developing problem of Chinese oil painting, he integrated the calligraphic style of traditional Chinese painting, calligraphy and oil painting, focused on the exploration of a national style of oil painting and the character of Chinese aesthetics.

Luo’s art had two main impacts on the history of the Chinese art world, on the one hand, they are revolutionary thematic paintings, and we have seen a lot of thematic paintings today, while the source of this long river was started by Luo Gongliu and other several predecessors. On the other hand, it is the important paintings finished by the painter when he was studying overseas in the former Soviet Union, these really brought some influential language of western painting to China, and transformed it with a Chinese style by himself. This is the important reason why we call him a master.

Oil painting requires the spirit of craftsman. And Luo Gongliu was a real “philosopher and craftsman”.

“Person” is the ontology of art, art can never depart from the essence of the humanistic spirit, the differences of art with an aesthetic value is the difference of the value of human nature, it is also the reason why Luo Gongliu’s works touch us.

Luo Gongliu led the students to Xinjiang, Mount Huang for an investigation and to sketch, this combined the training of basic plastics that penetrated into the labour of life with sketching in nature and visiting ancient art heritage, implementing the principle of “teaching students in accordance with their aptitude”, so that the students’ creations in the tutorial class of oil painting both included the in-depth thought connotation and humanistic concern, as well as various individual expressive forms…

He was an optimist in life, very fond of children, and also interested in joking with young people and was curious of many new things, for example, I studied science and engineering, so I often made some electronic things, then he always wanted to open it to see what is happening inside, he was very interested in everything.

Luo Gongliu (1916-2004), well-known modern Chinese painter, printer, art educator, he was born in Kaiping in Guangdong province. He studied in the National Hangzhou Art School. During the Anti-Japanese War, he participated in the Anti-Japanese propaganda activities in the 3rd office of the Political Department in Wuhan, and he went to Yan’an in 1938, and studied in Lu Xun Academy of Art and Literature, and went deep into the Anti-Japanese base in the enemy’s rear area together with the “Woodcut Working Crew of the Lu Xun Academy of Art and Literature”, and was in charge of the art work of “Xinhua Daily (North China Edition)”. After the victory of the war, he successively taught in the University of the North and North China University. In the early days of new China, he participated in the founding of CAFA, the former deputy secretary of the academy. In 1952, along with “Chinese Literary and Art Workers Battlefield Visiting Mission” he went to the frontline of the Korean War. In 1953, he participated in “Maijishan Exploratory Mission” to study Maijishan grotto art, organized by the Ministry of Culture. Luo went to the former Soviet Union to study oil painting in the Repin Academy of Fine Arts from 1955 to 1958. CAFA first created the studio system of oil painting in 1959, and Luo directed the teaching of “Luo Gongliu Studio”, which was renamed the 2nd Studio of the Department of Oil Painting in 1960. From 1961 to 1963, he directed the teaching of the tutorial class of oil painting. From 1950 to 1985, Luo Gongliu was appointed as the leader of the design group of Renminbi, organized and was personally involved in the design work of the second, third, fourth sets of Renminbi, which had an important influence on the world. He was a late professor, former Vice President of CAFA, former Secretary of the Secretariat at China Artists Association, former Standing Director of China Artists Association. In 2003, he was awarded the achievement award of plastic arts by the Ministry of Culture.

Luo Gongliu was mainly engaged in the creation of printmaking in the early years, his works reflect the life and struggle of the military and civilians in the Anti-Japanese Base, the representative works include: “If I Do Not Die, the Devil Will Die”, “Rhymes of Li Youcai”, “Ma Benzhai’s Mother”, etc. After 1949, he mainly created oil paintings and his paintings mainly portray Chinese revolutionary historical themes, and he made a contribution to develop Chinese oil painting, his masterpieces include the “Tunnel Warfare”, “Mao Zedong Made a Rectification Report in Yan’an”, “One Steps into the Breach as Another Falls”, “Chairman Mao in the Jinggang Mountain”, which are in the collections of the National Museum of China. Luo Gongliu was involved in a long term project on the work of art education and synchronously directed the teaching work of the tutorial class of oil painting hosted by the Ministry of Culture and Luo Gongliu Studio at the Department of Oil Painting, CAFA. His artistic ideas and teaching methods were implemented in the tutorial class of oil painting and he had a widespread influence on the creation and teaching of oil painting in China, and he trained a group of outstanding artistic talents.

On January 5, 1916, Luo Gongliu was born in Yueshan Town in Kaiping County, Guangdong Province, and he was formerly known as Ruihe.

In 1936, he was admitted to the National Hangzhou Art School.

In 1937, the Anti-Japanese War broke out, together with the teachers and students of the National Hangzhou Art School they withdrew and migrated west, he then engaged in the propaganda campaign against the enemy.

In 1939, Luo was appointed as the art editor of “Xinhua Daily (North China Edition)”, engaged in the wood carving work.

In 1946, he was the Director of the Department of Fine Arts at the School of Literature and Art, the University of the North.

In 1949, he went to Beiping and served as the branch secretary of the Department of Fine Arts of the third part of the University of the Northern China. He created woodcut illustrations of “Little Erhei’s Marriage” written by Zhao Shuli.

In 1950, he participated in the preparation of CAFA, served as a party member, deputy party secretary, and the deputy director of the training class of art cadres.Invited by the People’s Bank of China, he started the design work of Renminbi and took charge of the work for 35 years.

In 1951 he created the revolutionary painting “Tunnel Warfare”, “Mao Zedong Made a Rectification Report in Yan’an”.

In 1952, he joined the “Chinese Literary and Art Workers Battlefield Visiting Mission” led by Ba Jin, went to the frontline of the Korean War to experience life, sketched in the battlefield.

In 1953, he was appointed to Director of the Department of Printmaking, CAFA, and associate professor. He participated in “Maijishan Exploratory Mission” organized by the Ministry of Culture, to study Maijishan grotto art in Tianshui in Gansu province.

From 1955 to 1958, Luo went to the former Soviet Union to study oil painting in the Repin Academy of Fine Arts CAFA. During that period, he copied Repin’s masterpiece “Ivan the Terrible and His Son Ivan” in Moscow.

In 1958, Luo returned to China from the former Soviet Union, and participated in the founding of the Military Museum of the Chinese People’s Revolution, organized some of the famous national painters to create revolutionary historical paintings. He was a professor of CAFA.

In 1959, he went to Jinggang Mountain for the first time, to collect materials and created the oil painting “One Steps into the Breach as Another Falls”.

In 1961, Luo directed the teaching of the 2nd Studio of the Department of Oil Painting, CAFA, and the tutorial class of oil painting, and created the revolutionary historical painting “Chairman Mao in the Jinggang Mountain”.

In 1970, together with CAFA, he was devolved to the troop farm in Ci County, Hebei province to labor.

In 1977, the work of CAFA was recovered, and he was a member of the leading group.

In 1979, he was Vice President of CAFA, but became ill with colorectal cancer, then undertook resection surgery.

In 1981, Luo went to Shengshan Island, Zhejiang province to convalesce, and created the “bamboo shell brush”, and studied Chinese calligraphy.

In 1983, “Luo Gongliu Painting Exhibition”, sponsored by the China Artists Association, was held at the National Art Museum of China.

In 1997, “Retrospective of Luo Gongliu’s Art” was held at Yanhuang Art Museum.

In 2003, he was awarded the lifetime achievement award of plastic arts by the Ministry of Culture.

Courtesy of the artist and CAFA, translated by Chen Peihua and edited by Sue/CAFA ART INFO 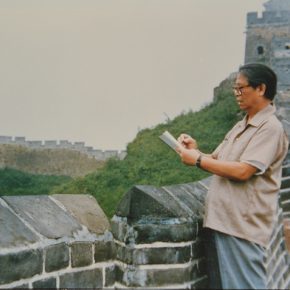 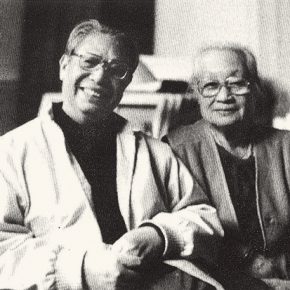 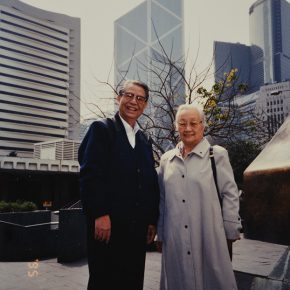 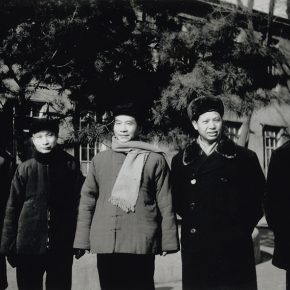 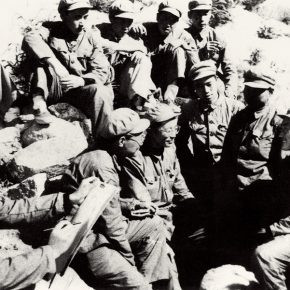 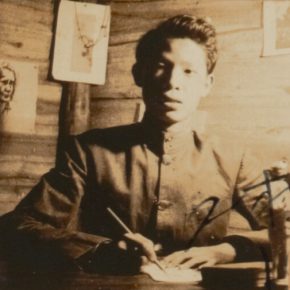 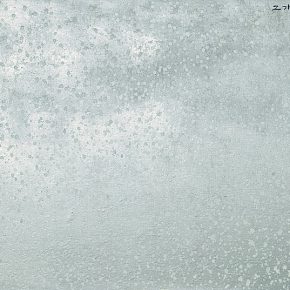 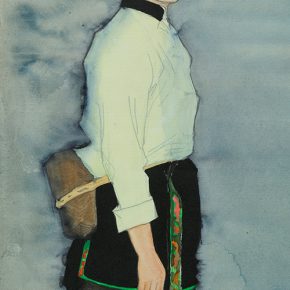 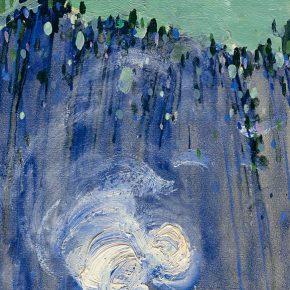 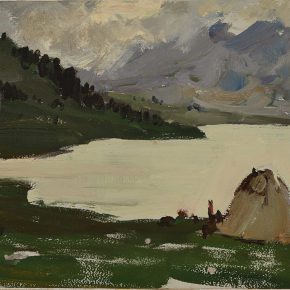 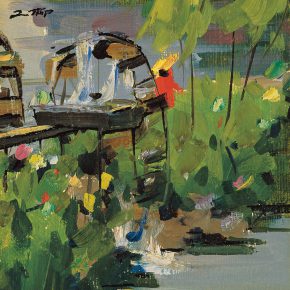 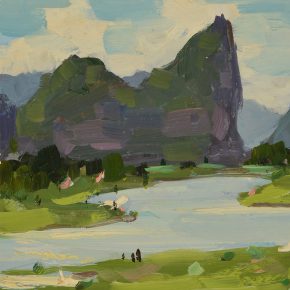 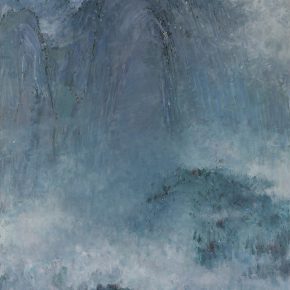 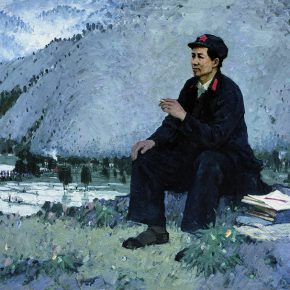 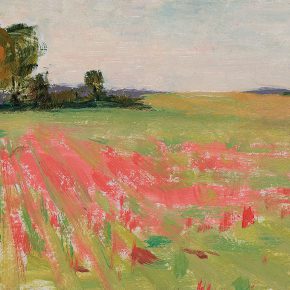 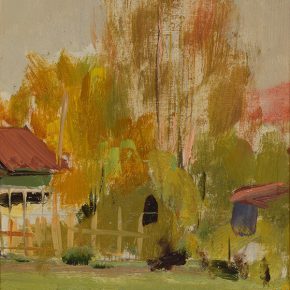 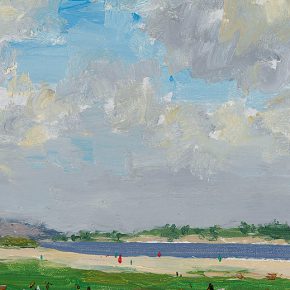 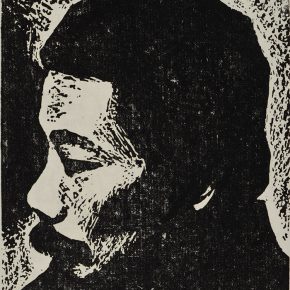 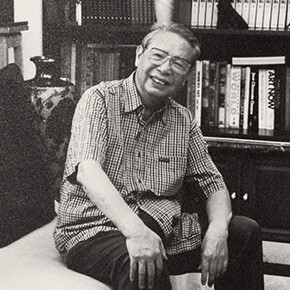