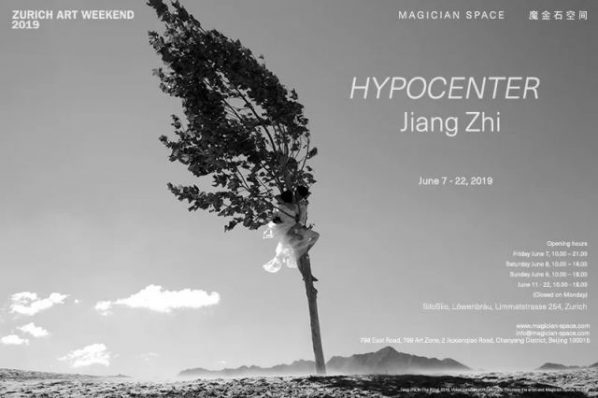 Magician Space presents Hypocenter, a solo exhibition of works by Chinese artist Jiang Zhi at Zurich Art Weekend. Active since the 1990s, Jiang Zhi is an artist who has paid close attention to a variety of issues in contemporary society, culture, and contemporary art itself. Possessing a poetic and distinct artistic language, his work deliberately evades the one-dimensional interpretation of events and meanings. By obscuring social representations and information, Jiang Zhi’s work attempts to question the consumption of meaning and the ossified modes of its narration and critique. At the same time, the artist uses inner dilemma and human emotion as clues to explore the ambiguity between the self and the other, the isolated and the whole.

Showcasing representative works created by Jiang Zhi in different periods, Hypocenter will form a vibrating visual field, which aims to reveal inner drives and conditions of perception normally hidden by objectivity. For the artist, the tremor is reflected in the process of going in and out of control, or put in another way, it is a movement between balance and imbalance. The question Jiang Zhi seeks to explore is: What is the source of the tremor? And further, have such perceptual experiences of ours such as shock and being moved emotionally been somehow preset? Through presenting a series of works related to life experiences, the exhibition combines common forms of bodily expression and perceptual experience to convey the fragility of meaning and the failure of systems.

The six human figures of the video installation Tremble (2009) are distributed throughout the floor of the exhibition space: the human body that constantly trembles, its posture and reactions driven not just by the system mechanism, but also by irresistible involuntary forces. The four channel black-and-white video In the Wind (2016) takes the form of a fortress, providing the audience with a structure that is viewed from the outside to the inside, and creating a whirlwind interior space within the vibrating space. The work’s four scenes "Sisyphus's Boulder", "Father's Back", "Shifting Trees", and "Tempest" use immersive moving images to show the individual's struggles with violent external forces. Further, the installation presents a metaphor for the dilemma of individuals caught up in the storm of social transformation and changing times.

On several of the exhibition walls, circular images from Shine Upon Me (2006) flicker intermittently. In the film, the subject is forced to endure a sudden glare of light on their face: the "light" violently exposes everything "specific" at the same time as it gradually fades away. Elsewhere in a cramped corner of the exhibition room, the characters of Onward! Onward! Onward! (2006) run continuously. These running figures are actors who are similar in appearance to the three top Chinese leaders in modern times. Jiang Zhi uses such portraits of figures of progressivism in modern China to analyze the actions of political symbolization and sanctification. Their steadiness forms a disharmony with the shock of their bodies upon each impact with the ground.

This kind of tremor is not an isolated personal feeling, but occurs more in the relationship between a certain era of a society and the tiny, vulnerable individual facing it. The non-event or non-narrative video works in the exhibition mobilize the individual psychology that is so often hidden under social or structural narratives. Just as the moment of burning flowers in Love Letters (2010-2014) is permanently fixed, so is revealed the paradox between the temporary and eternal, resonance within the system, and stability in imbalance. As love is to life, it is fragile but fair. As Jiang Zhi has said, “This is a love letter for everyone, it is a love letterfor all who are in love and loved, not a love letter for someone or some people”. At this level, Love Letters emphasizes a holistic worldview, and offers a strong protest against the segregation and division of humans into different groups.

Jiang Zhi (b.1971, Yuanjiang City, Hunan Province) is a Beijing-based artist who graduated from the China Academy of Art in 1995. After participating in the 'Post-Sense Sensibility' exhibitions in the 1990s, Jiang Zhi has subsequently proceeded to become one of the most influential Chinese artists of his generation. He works with a wide range of mediums that span video, painting, photography, installation, poetry and writing novels. He was awarded the academic achievement of Reshaping History (Chinart from 2000-2009) in 2010, the Asian New Force IFVA Critics Award in 2002, and was also awarded the Chinese Contemporary Art Award (CCAA) in 2000.

Courtesy of the artist and Magician Space, for further information please visit www.magician-space.com.