From audiences’ perspectives, an exhibition gathering five artists with diverse personalities within one space should be a great attraction. At the beginning of the January 2020, curated by Professor Yin Ji’nan, the group exhibition “Five Monological Spatial Dialogues” commenced in the second Gallery Space of Tang Contemporary Art, which features five of the most representative artists in Chinese contemporary art field, namely Liu Qinghe, Sui Jianguo, Su Xinping, Xu Bing, and Zhan Wang.

Regarding the title of the exhibition, “Five Monological Spatial Dialogues,” “monologues” and “dialogues” are opposite in terms of behavior. However, the two share the same intention. These five artists are connected by the space, which provides them with a chance to realize a dialogue. When spectators enter the exhibition space, another dimensional intervention of the conversation is expected to happen. According to curator Yin Ji’nan, the initial idea about this exhibition came from the book How Do We Make Art Today? (Shandong Fine Arts Publishing House) edited by the curator. In this book, the personal statements of these five artists are gathered, which appear as monologues. These statements were essentially monologues and the ideals behind the monologues of the hope to achieve understanding through dialogue.

As the curator’s words state, the human context has been globalized. Although the trade war is not a substitute for the Cold War, it does occupy a part of our thinking to a certain extent. Nationalism cannot replace Internationalism and Realism cannot supersede Idealism either. All the seemingly urgent real themes may not be developed with artistic motifs. It is hard to propose an artistic concept that allows artists to agree with each other. In this exhibition, the five artists share a similar background and international cultural context. Born around the 1950s to 1960s, they witnessed China’s Reform and Opening-up Policy and social changes, as well as  participating in the Chinese contemporary art movement. They provided their own conceptual methodologies and art forms as responses.

Instead of giving many limits to artists, the curator provides artists with a chance to make their own decision in terms of work. The consequence of the artworks displayed in the exhibition is based on both intentional and unintentional ideas. The exhibition is divided into two spaces. Several posters are hanging in the middle of the first hall, showing information about the curator and five artists. There is a long white desk on both sides of the exhibition hall, where artists’ catalogues and related archives are provided for further reading.

Liu Qinghe: Touch Stone, Cast Stone and Away from the Shore

The second hall focuses on the works of five artists. Three ink paintings by artist Liu Qinghe are showcased in this exhibition, namely, Touch Stone, Cast Stone and Away from the Shore. Liu Qinghe mentioned that these three ink paintings have only been exhibited once in “INTO ASHES: Liu Qinghe Solo Exhibition” in the United Art Museum, Wuhan. It is the first time to show them in Beijing. As one of the representative artists in the field of Chinese ink painting, Liu Qinghe is always exploring the modern aspect behind the ink. As a linguistic destination of traditional Chinese symbols, how can ink painting develop a characteristic of the times? Such questions are always behind Liu Qinghe’s art creation. These three paintings actively inspire spectators’ considerations regarding the human situation in modern society, as well as revealing the complicated and implicit emotions of people living in the urban city.

The pulsating ink lines in the Cast Stone resembles diversified emotions. In the era of anxiety, where shall we cast the stone in the heart to gain the inner insight? Meanwhile, what expressions in Touch Stone produce an ambiguous situation. The woman in the painting rests her hands on the rocks and looks into the distance sideways. Liu Qinghe records the hidden emotions behind people’s behavior as a bystander. His observations are expressed in his paintings. The title Away from the Shore may remain with people in an offshore concept in an economic sense. In the current financial society, the artist’s ink theme and content present a spontaneous relationship with society, which may attract the viewers’ gaze.

Su Xinping exhibits his work Wasteland series created since 2015. As an artist, Su Xinping always has a sense of current art, which affects his thinking in all concepts, methods and new media.

The work Wasteland No.8 is 22 meters long. The depiction of the wasteland and ruins comes from the environment in which the artist grew up in Inner Mongolia. The grey ink color of the wasteland echoes the traditional Chinese ink landscape. The run-down grass on the wasteland grows and is barren year after year, which resembles the scenes of present society. It highlights the anxiety through development and transformation. The visual presentation of the work brings more to the language of modern images – the content of figuration and narration is replaced by the ash-like patterns, which implies that the pattern of modern art may enter a barren state.

Sui Jianguo’s large-scale 3D printed sculpture Cloud Garden series is an important work displayed in his solo exhibition “Echo of System: Sui Jianguo 1997-2019” held by Beijing Minsheng Art Museum in 2019. From his point of view, the sculpture has already moved from the “making” phase to the “creating” stage. The material characteristics of the work are wrapped in thought and culture and they are moving towards a poetic future. With the help of 3D technology, the artist can fully represent the image of “clay”. Meanwhile, his work also emphasizes an engagement with people – the fingerprints left on the surface of the sculpture. From a cultural perspective, as a medium, the sculpture has become a concrete incarnation of everything in the world.

In this exhibition, by placing Sui’s work among other works, a unique poetic meaning has been developed. As in the traditional Chinese garden, sculptures are like mountains and stones, which invite audiences to walk around. The sculpture bears clear fingerprints, which indicate a mix of the original feeling of clay and modern technology.  The “cloud” in “Cloud Garden” refers to cloud storage. These magnified fingerprints have been visually transformed by modern technology, which enhances people’s thinking about future sculptures.

Xu Bing: Book from the Ground

Xu Bing’s Book from the Ground is a work derived from a reflective response to the significance of the current symbolic system. In the age of the image, the function of language has gradually been replaced with a certain symbolic system. Some of them can even meet the requirement of people’s daily communication. The work is a 3D book divided into two volumes of black and white, which tells about the protagonist’s busy but interesting life within a day. Without applying any word system, the book conveys the story through the use of symbolic language, which makes expressions more direct and vivid. When confronted with such a language system, the readers might find an easier and more convenient way of communication. However, it is unavoidable that such communication is challenging and has to step further for an exchange of deep meanings among people.

Following the work Book from the Sky, this work is Xu Bing’s continuous in-depth reflection on the existential significance of languages, characters, and symbols in a contemporary cultural context. It is worthwhile exploring how to use a certain method and thought to link multiple linguistic forms in a growing global context. Xu Bing created his new English characters based on such thinking. As Xu Bing once stated there was a common idea in these two books: “No matter what language you speak or whether you are educated, they treat everyone in the world equally.”

Zhan Wang’s new installation Dilemma offers audiences a strong visual impact and experience. The work appears as a white box. When viewers throw the ball into this white hexagon, the ball will produce irregular movements. The marks created by the collision of the sphere with the white wall form mural-like patterns. Space and time, dynamic and static, vision and audio exchanges in the same field. Meanwhile, the ball in the process of jumping produces a new dimension which depicts the desire in the four-dimensional space. However, such a desire is limited by the three-dimensional space. Thus an inescapable dilemma is eventually formed.

The work inspires people to reflect on whether the dilemma of human progress and development comes from people themselves or interference from the outside world. Within such a free dimension, it seems that we can put everything under our control and even make a breakthrough. However, the fact is that a fixed spacial dimension can make it difficult for people to achieve any great breakthroughs. Zhan Wang is adept at creating experimental artworks through simple materials. His work discusses the complicated essence of various problems. The sensory and mental stimulation of the work’s appearance can always invoke people’s constant reflections.

The exhibition gathers five artists with tremendous artistic energy within one space. Their works and artistic thoughts collide with each other at such a close distance. For artists, they are merely seeking differences in familiarity; however, for viewers, it is more a matter of looking for familiar issues in different artworks.

Photos of artwork courtesy of the organizer. 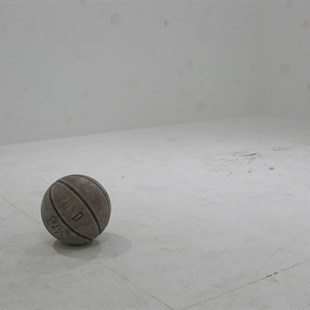 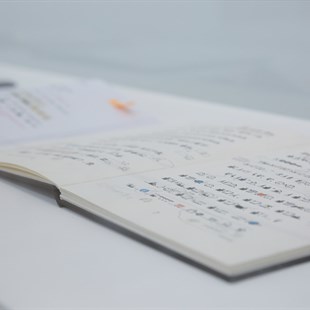