Interview | Dionisio Cimarelli:"The sculpture has to be a sample of life.” On the occasion of the opening for Chinese sculptor Liu Shiming’s retrospective exhibition “Departure and Return: Liu Shiming’s Sculpture” in Asian Culture Center New York, Italian professor and sculptor Dionisio Cimarelli was invited to participate the relative symposium held at the Columbia University. As a further exploration of Liu’s sculpture in the Western context, the symposium integrated topics of “Chinese Method” under the Western perspective, a comparison of Chinese and Western sculptural materials and techniques as well as the emotions and modernity rooted in both cultural contexts.

Though being a European, Dionisio had a nine-year experience in Shanghai, China as sculptor, lecturer and art consultant. His cross-cultural art background and personal interest enable him to specially know wide knowledge in traditional techniques and experimentation with different materials, like marble, bronze, wood, porcelain and ceramic. After the symposium at the Columbia University, CAFA ART INFO specially interviewed Dionisio to have a further discussion concerning Liu Shiming and sculptural art nowadays.

CAFA ART INFO: Hello Dionisio, thanks for your time. Regarding the symposium you participated today, I have several further questions for you. You mentioned your encounter with Liu Shiming was as early as the 1980s. After viewing Liu’s exhibition in the Asian Culture Center, you may have a new feeling or understanding of his work. Can you share them with us？

Dionisio: Sure. As I mentioned before, I heard the name of Liu Shiming in 1986, when I visited Beijing, China for the first time. That was also my first visit to CAFA. I did not know Liu Shiming before, and unfortunately I did not have the chance to meet him. At that time, I saw some pictures of his work and was already interested in them because I was fascinated by traditional sculptures from China. I could see that he had some background of the Soviet Union style. I could perceive such background in Liu’s work as I met many Chinese professors before when I studied at the Academy of Fine Arts (Repin) in St. Petersburg, Russia. They shared the same influence and style with Liu. But in some way, Liu Shiming looked forward, which means he tried to make interpretations of his works and emphasized his background in traditional Chinese history. He seemed to especially explore the Tang Dynasty sculptures over thousands of years before. I noticed that he particularly used two colors of clay, namely, red and white, and attempted to combine them. During the Tang Dynasty, craftsmen just used the red clay and painted other colors on it. That makes big difference. Usually, when sculptors combine the two different types of clay, it is really difficult to crack. It is a very common issue in the field but was solved by Liu. He is a master and he managed it very well.

CAFA ART INFO: You mentioned Liu Shiming was interested in clay as material. How do you understand Liu’s sculptural language in terms of using and transforming clay to his sculpture?

Dionisio: In my view, Liu Shiming did not make pottery sculptures as maquettes for future works. Instead, he regarded them as the final pieces. Liu Shiming is thinking of clay when he is making sculptures, which is essential. By doing so, viewers can perceive the expression and natural position of the figure. His works feature simplicity and fewer details, which present Liu’s interpretation of the soul of the sculpture. I am Italian and terra cotta in the ceramic showcases a part of Italian culture, so I work with it quite often as well. Based on my understanding and experience, I regard clay as a natural material, although simple and cheap, can convey an extremely interesting expression.

CAFA ART INFO: From your background as a sculptor from a Western country, I am curious that what do you think is the uniqueness of Liu’s sculpture compared to Western sculptures in terms of materials, sculptural languages, techniques and motifs etc.?

Dionisio: Actually we are quite similar in terms of art creation. Though I am Italian and Liu is Chinese, what we are in common is that we all look at our (country’s) past. China is with a quite long history and Italy as well. When I was making my figurative work, I was always looking at the past - the great master, the history and the ancient  culture of Italy. But as soon as I started to travel, I was looking at the past of different countries, France, Germany and other countries around Europe and China. Before I moved to China, I was still working with my background as Italian and European. But as soon as I got to China in 2004, I wanted to be a medium to analysis my personal experience in China. In this case, I tried to get experience and skills from traditional China, and combined with my own culture. In some way, I think it is important for people to look back and at the same time to look forward. You can learn and you combine with different cultures. So Liu Shiming looked back to the past, and this is also the thing I am doing all my life.

The difference between us is that I traveled a lot, and I think Liu Shiming did not travel that much. Thus I have the opportunity to see difference and learn more from other cultures. When I went to China, I looked at the traditions of China, including colors, techniques and materials. Overall, what Liu Shiming and I are in common is that we look at the past and look forward at the same time.

CAFA ART INFO: In the symposium, you mentioned the humanism behind Liu Shiming’s work. I viewed the exhibition and saw many pieces of work are about his family and ordinary people’s daily life. I think that can somehow reflect Liu’s personality and his humanistic pursuit. Do you want to make a further evaluation of this idea based on your perception?

Dionisio: I think the humanistic spirit is significant for Liu Shiming. He tried to take things from everyday life, all the people around him, simple things such as a child playing with toys and a person going around with a bicycle etc. I think all these themes of his work are human beings, which present a vital difference with sculptures nowadays. If we look at art today, we can hardly see human beings (as motifs). The art became to be abstract and developed to be increasingly decorative. Liu did not make any decoration. Instead, he tried to step deeply into the human’s soul. At this point, I resonate with him. Although our sculpture seems to be different in terms of shape and technique, we shared some similarity in thinking. He tried to represent the feeling and human beings, which are the center in his work. In my view, he did not merely represent but showcase the soul—what is inside of a person.

The sculpture has to be a sample of life. Some good impressions are necessary for us. Obviously, no way is absolutely right and everything—pleasure or sorrow, is part of life. Sometimes people are depressed but they can express inside of soul and personality through such distressing experience, which is deep and incredible. Many artists show them in different ways. I think this is very important session that we lost in the contemporary society.

Today, I cannot see much figurative art, which seems to present that the man is not that important anymore. Today the “man” is a number. During the humanism and Renaissance, the “man” was the center of the universe. From this perspective, we all need to learn from Liu Shiming. That’s why I said I am glad to see the promotion of Liu Shiming as an artist. I still want to emphasize the value of reexamining the past. No matter if one is a Chinese artist or Italian artist, he or she should look back to his or her history, which does not mean to repeat previous works. Instead, it requires the artists to present the identity of the man in a new and contemporary way. It is worthwhile seeing Liu’s work concentrate on the human being, on expression and the soul of human beings.

View of Exhibition and Interview by Qi Siyang, Lu Weijia

Photos of artworks courtesy of the interviewee and the organizer. 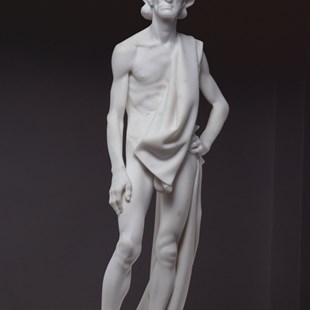 Online Classes of CAFA: Explorations of “Book Design” by the Printmaking Department on Continuous Reading