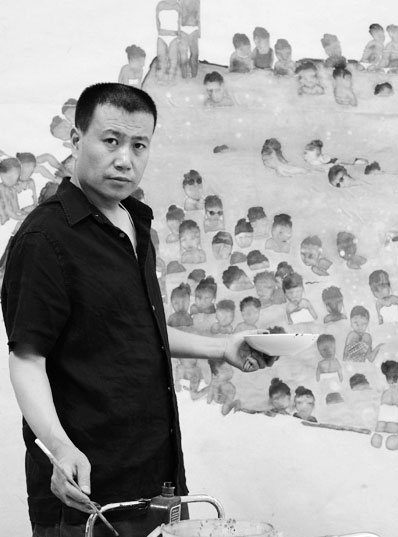 Generally acknowledged as a contemporary master of ink and wash painting, Liu Qinghe is renowned for challenging the boundaries of this traditional medium to portray today's realities. The bulk of his figurative works over the years depicts everyday people, his family, his friends, and those he has imaged. All of his figures are placed in urban backdrops, engaged in contemporary relationships and fixed in modern-day ideological crisis. Their feelings of insecurity, confusion, dejection, lethargy and helplessness are apparent in his portraiture of a diverse collection of real life characters and situations.

Liu Qinghe graduated from the Tianjin School of Arts and Crafts in 1981.Afterwards he earned his Bachelor degree from the Folk Art Department of the Central Academy of Fine Arts (CAFA) in 1987 and his Master’s Degree from the Chinese Painting Dept, CAFA in 1989. In 1992, Liu served a residency at the Royal Academy of Fine Art (RAFA) studio in Madrid, Spain. Now he serves as Assistant Professor in the Chinese Painting Dept of CAFA while lives and works in Beijing.

Liu Qinghe has won the Second Prize at the 1985 Academy Show at CAFA. In 1994, he was awarded the Gold Prize of the Beijing Exhibition at the 8th National Fine Arts Exhibition, NAGC. Liu is represented by Red Gate Gallery in Beijing and Goedhuis Contemporary in New York. He has his works exhibited in many museums and galleries home and abroad while his works are collected by the Embassy of Australia, Museum of Fine Arts in Boston, National Art Museum in Beijing, and Shanghai Art Museum, etc.

1981 Graduated from the Tianjin School of Arts and Crafts

1987 Graduated from the Folk Art Department of the Central Academy of Fine Arts (CAFA), Beijing

1989 Graduated with a Masters Degree from the Chinese Painting Dept., CAFA

On the Border, The Watchtower -- Contemporary Art, Beijing

Yi Ying, From Light Rain to Shooting Stars, Interview with Liu Qinghe on His Art