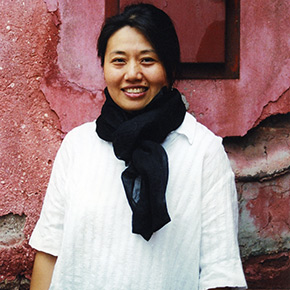 In 1987, Liu Liping graduated from the CAFA, with a bachelor’s degree and teaches in the school, where she graduated with a master’ degree in 1996. Currently she is an associate professor and a master instructor of the Printmaking Department at CAFA, a member of the Chinese Artists Association.

I was admitted to the Printmaking Department of CAFA in 1983, and have taught here since 1987, henceforth I have been engaged in printmaking. Over nearly three decades of teaching and creation experiences, my creative passion for printmaking has never diminished, although the creative process is full of pain and hardship, I have abundantly harvested artistic ideas, artistic approaches and artistic forms on the road to pursue art, because of my unswerving pursuit of constant exploration and innovation.

During my study at the academy, I have boldly absorbed some artistic characters of woodcut chromatic techniques with my study and practice of serigraph, flatly printing several large colors, resulting in an artistic quality that is different from the past. In addition, when I worked, I integrated experiences of oil painting creations into the new printmaking creation, such as the use of strokes and forms, to give the prints a new flavor and meaning. Especially the years before and after 2004, when I was trying to create sketches in Chinese painting, the exploration of paper was improved to a certain level, the technologies on which they were based offered me an unexpected harvest with the use of materials.

The artistic form of my current prints has transformed from the previous single, simple print into a diverse and complex selection.The integration of a variety of art forms will now be more marked in my work.

It is both the accumulation of years of practice and knowledge.