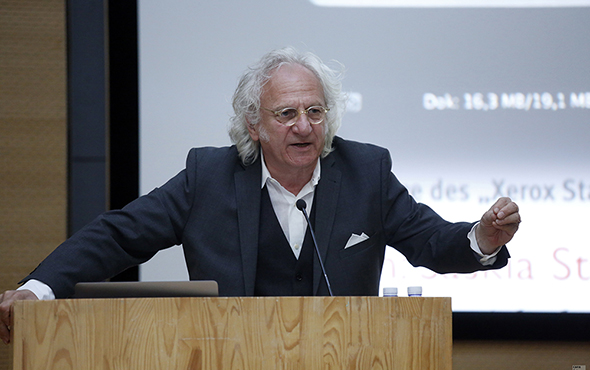 Zhang Ga, the host, introduced Mr. Zielinski as a Professor of Media Theory at the University of Berlin, the Michel Foucault Chair Professor of Media Archaeology and Techno-Culture at the European Graduate School (EGS) in Switzerland, the President of the Karlsruhe University of Art and Design in Germany (2016-2018), and the Founding Dean of the Academy of Media Arts Cologne (1994-2000). He is also an accomplished writer, has published numerous academic works such as Deep Time of the Media (2006) and Variantology: On Deep Time Relations of Arts, Science, and Technology (2005). In short, he is not merely a great scholar and art theorist, but also one of the founders of Media Archaeology. He has made crucial contributions to the field of Media Archaeology: he extends the concept of Media Archaeology beyond the horizon of mainstream Western cognition, counting Middle Eastern and Asian cultural and technological history as important components.

Prior to the beginning of this lecture, Prof. Zielinski said that due to limitations on time and future curriculum design, he had made minor adjustments to the original theme. He switched the original topic “A Short Genealogy of the Interface” to mainly talk about “Field Study of Deep Time Man-Machine Relationship”, yet retained some content about the Man-Machine, Machine-Machine relationships as well as the association between objectivity and subjectivity from the former lecture.

Prof. Zielinski first mentioned that one of the motives of investigating survival time is the interdependence between mechanical and non-mechanical. Its focal point lies in the complex, tense interconnection between and unification of the technical part and the biological or human part. Taking the typewriter as an example, through the means of co-writing and co-creation, simple machines like them still get involved in the creation process of artists, philosophers, and poets. Prog. Zielinski then presented video clips of typewriters, showcasing the dramatic and tense nature of typing itself and identifying the strong interactions between humans and machines as a drama of interfaces. Subsequently, he used artworks with this characteristic created by artists from different countries to demonstrate his point. His models were of various artistic forms, including tattoos, skin paintings, and body piercings. In his eyes, artists of this sort used their bodies as an interface to communicate with the outside world. A body covered with tattoos and piercings resembles an allegory, analogous to the condition when machines hid their internal function and operating structures under a soft interface. In this case, human skin served as the dramatic interface between the internal and external worlds.

Prof. Zielinski went on to say that we have built trust with machines from a certain time. With this faith, machines have been evolving, becoming more and more intelligent or in other words, having more “external intelligence”. They began to draw, write, and compose, bridging the intellectual gap between them and us and thereby running increasingly parallel to our unique quality. We have become more confident in machines. We have projected our own needs and desires onto them. In the meantime, machines have been constantly pleasing and satisfying us. In a word, we share the world with machines. The growing intimacy between us and them has made it more impossible to deter the humanization of machines and the mechanization of humans. Machines, in turn, start to trust us. Prof. Zielinski presented a “trust machine” that he bought in 2005. Used as a Buddhist music player, it created an unspeakable atmosphere for listeners, making them feel like they were truly experiencing the chanting of a real Buddha that resided inside it. However, this is unfalsifiable. If you try to open it with the incentive to find the Buddha, the machine will no longer be usable. To keep it functioning, you have to trust it without any distracting thought of testing your hypothesis. Another instance of “trust machine” was the electronic ceremonial dedication machine in Southern European churches. It changed the traditional dedication manner, in which disciples bought candles to light up god’s residence, replacing candles with a button and electric lights. You can push the button to turn on the lights and leave money in boxes in front of the machine. Nevertheless, most people will not pay for the updated dedication ritual. In contrast, the machines trust their customers and will light up lights whether or not they are getting paid. From Prof. Zielinski’s standpoint, we need to have equal or higher confidence in and respect for machines, especially as they become more and more powerful today.

Next, Prof. Zielinski discussed the four principles of Media Archaeology and Variantology. First and foremost, it should be globalized rather than Europe-centric. Second, it should be multi-faced and variegated rather than generalized. Third, it should be inclusive and cosmological rather than anthropocentric. Fourth, it should be multi-lineal and dynamic rather than unilineal. Based upon these principles, he established a virtual research institute called “the Institute of Southern and Eastern Modernity” (ISMs). Researchers of this institute disproved the existence of a single, dominant modernity and hoped to find alternatives or comparable theories for the view of Cultural History led by G.W.F Hegel. Prof. Zielinski who found that an increasing number of people are aware that the development of European culture itself is inextricably linked with regions in the East and South. Due to this relevance, the core of modernity cannot be discussed separately without mentioning the Eastern and Southern regions. He then displayed a highly sophisticated automatic machine from the ancient Muslim manuscript and offered a brief introduction to its operating principles as well as attainment. The “Future Archaeology” project that he is now conducting with his students has restored an “automatic player” by referencing the illustrations and descriptions in ancient manuscripts.

Afterwards, Prof. Zielinski showed a variety of achievements of the ancient industrial civilization, including the twentieth-century screaming automatic goblet, the public audiovisual time-measuring device, and the multicultural elephantine chiming clock, revealing that the technological or mechanical heritage that we attribute to European Renaissance in fact originates from Arab and Muslim cultures. In the end, he emphasized the operating principles and attainments of the “Water-Powered Armillary Sphere” designed by Su Song from the Song Dynasty and pointed out the essential quality of knowledge translation and exchange between different countries and regions. He said that we will find a lot of amazing things in the course of searching for past science and technology. We will return to the present with new findings and enter into a brand new future. In this process, the concept of “progress” seems to have disappeared. Past innovations become even more advanced and complex as compared to ours, which galvanize cultural humility. Finally, Prof. Zielinski ended this excursion to the world of the sacred machines with a manifesto that read “Let’s go back to the future!” 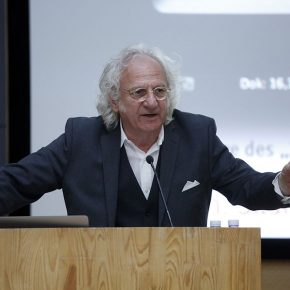 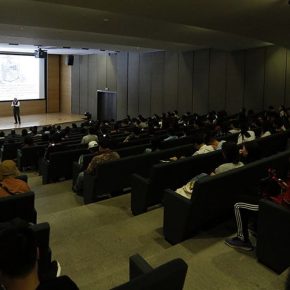 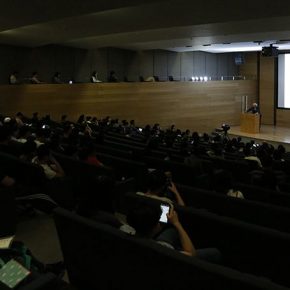 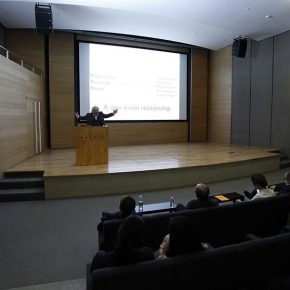 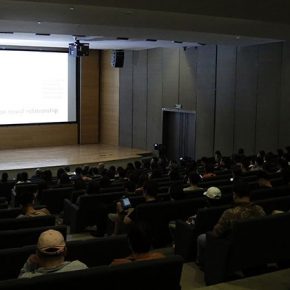 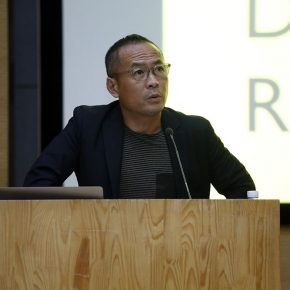