Gong Yushu: Behind the Cuneiform Literature — a case study of Enmerkar and the Lord of Aratta 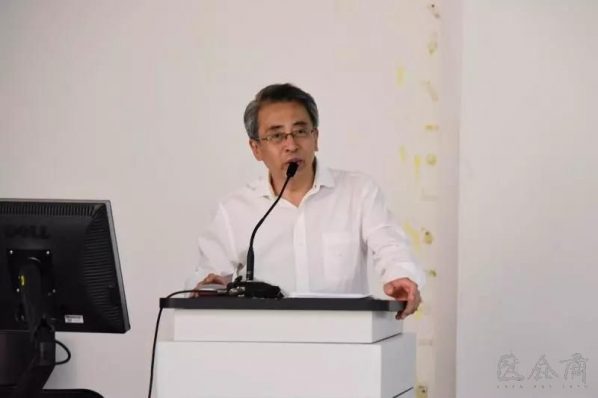 The 12th lecture series of “Humanities Lecture — Language and Civilization,” sponsored by the School of Humanities of CAFA, invited Gong Yushu, a professor from the School of Foreign Languages at Peking University to present. Professor Gong investigated deep into the famous clay of the legendary account, Enmerkar and the Lord of Aratta that he had spent over ten years translating. Through systematically displaying its literary value, social account, historical perspective as embodied in the Sumerian literature, Professor Gong provided some new insights into the “Sumerian Problem” that has been debated in academia for a long time. 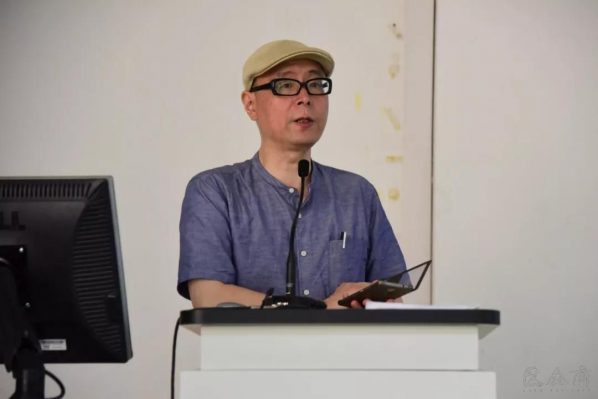 The host Professor Li Jun, Associate Dean of the School of Humanities of CAFA

According to the host of the lecture series, Professor Li Jun, Professor Gong Yushu is a well-known expert in Assyrian studies. In his early years, he studied Assyrian at the University of Göttingen and the University of Munich and received his Ph.D. from the latter one. After returning to China, he taught at Peking University. Currently, he is a professor, a doctoral supervisor at the School of Foreign Languages in Peking University and the vice president of the Chinese Society of Ancient and Medieval World History. Professor Gong has written plenty of works, including Western Asia Archaeology, Let’s Rise! Like The Sun: Analyze The Sumerian Epic “Enmerkar and the lord of Aratta” and Comparative Studies of Ancient Sumer, Egypt and Chinese Characters. In addition, he wrote many other pioneering works in domestic academia and two works written in German — Die Namen der Keilschriftzeichen (The Names in Cuneiform) and Studien zur Bildung und Entwichlung der Keilschriftzeichen (Studies of The Formation and Development of Cuneiform). 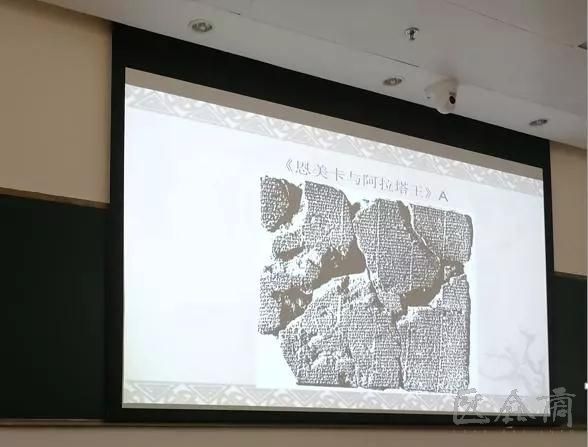 Professor Gong’s speech began with a clay tablet carved with the legend of Enmerkar and the Lord of Aratta. He showed the audience the best-preserved tablet from over 30 existing transcripts. The script was written on both sides of the tablet. Each side is divided into six columns in Sumerian cuneiform, and there are, as a whole, more than 640 lines. The characters are tight as there is so much information contained on the tablet and it takes almost 40 minutes reading from the beginning to the end. The transcript was written in 1800 BC, but the legend itself was created in 2000 BC and the content is set to 2900 BC. The cuneiform writing is one of the earliest known scripts. In the forth archaeological discovery of the 3200 BC Uruk culture, thousands of excavated clay tablets with the cuneiform texts were unearthed, and most of the information on them is about economics.

Professor Gong then discussed this topic based on his book, originally published in 2006, Let’s Rise! Like The Sun. Starting with his research on the translations in nearly 12 years, Gong introduced us to an overview of the plot. The story took place in Uruk, a brick-built city, in the southern part of the two rivers. The king’s name was Enmerkar who was an agent of god in the human world, and he built temples to ensure peace in the country. However, Uruk lacked wood and metal to build and decorate the temple, so Enmerkar decided to attack the city of Aratta to seize its resources. The goddess of the two rivers, the god of war, Inana, happened to be the protector of both cities. Therefore, Enmerkar persuaded Inana to suffer a disaster in Aratta so that he could occupy Aratta easier. The goddess Inana accepted Enmerkar's request and sent an eloquent messenger to put pressure on providing the essential resources to Aratta. This is recognised as one of the earliest psychological warfare techniques in the history. Before the departure of the messenger, Enmerkar asked him to transcribe the contents of the message from both sides. Then, Professor Gong pointed out the location of Uruk and Aratta on a Near Eastern regional map. Uruk was located in the southern part of the two rivers, while Aratta was likely to be located in southeastern Iran, near Afghanistan and Pakistan and linked by the mountains. The plot continued and the messenger of Uruk went to Aratta and delivered the demand of King Enmerkar, but the King of Aratta didn’t surrender. While the Uruk messenger pressed harder, the King of Aratta came up with a plan. He asked the servants to use bags of grain to carry food by donkeys to Aratta. After hearing this, Enmerkar had no idea what to do. Later, he was helped by the writing and wisdom goddess Nisaba, and came up with a clever trick to soak the barley in a narrow opening bag and seal it with a clip. The scheme of King Aratta failed and he then deliberately created another one — asking for a scepter which could not be made of gold, silver, stone, and wood. The goddess of wisdom, Enki, came forward to help and handed a scepter to the King of Aratta. In the end, the King of Aratta was desperate after all the attempts and he finally asked both sides to send a warrior to fight and the costumes of the warriors had to be of various colors. After hearing this, Enmerkar lost patience and issued an ultimatum to the King of Aratta. Eventually, because the message from Emmerkar was too long for the messanger to pass on, the messenger began to write the text on a clay plate, that is, the origin of Sumerian writing. Then a male warrior who represented Aratta and a witch who represented Uruk entered a duel. After that, the clay tablet was severely damaged and lost, though there was a happy ending.

Professor Gong continued to analyze the literary value of the legend of Enmerkar and the Lord of Aratta from the viewpoint of its content and the context of society at that time, the Sumerian perspective on history and the origin of the text as he posited that it was possible that the Sumerians might come from Aratta which is in southeastern Iran. The author of the legend, in order to make it popular and fascinating, uses a large number of literary techniques, such as parallelism, simile, metaphor, onomatopoeia, hyperbole, and intertextual compositions. The main line of the story is transmitted through dialogue and monologues of the characters. In addition to its literary value, this legendary account also reflects the historical information of society at that time, such as the manufacturing technology, textile technology and long-distance trade. In addition, Nudimmud in the legend with three paragraphs beginning with “when there is…” 1 reflects the Sumerian views on history; that is, history is divided into three periods. The first one is the “golden age” without any danger, the second is the era of the nations and the third is the era of hegemony in which “the king fights, the monarchy fights, and the lord fights.” In particular, the content of the legend refers to the invention of the texts in the two rivers. The words were created and written on the clay tablet when the messenger was not able to transmit the information orally. This is the first official appearance of the cuneiform writing, as the hero invents the words. Professor Gong analyzed the personal life of Enmerkar and the King of Aratta by examining the inscription and then responded to the “Sumerian Problem,” as he believed that the Sumerians are likely to come from the eastern mountains of Aratta. In the end, Professor Gong summed up the legend, showing the readers the style of literature in the region of two rivers over 5,000 years. 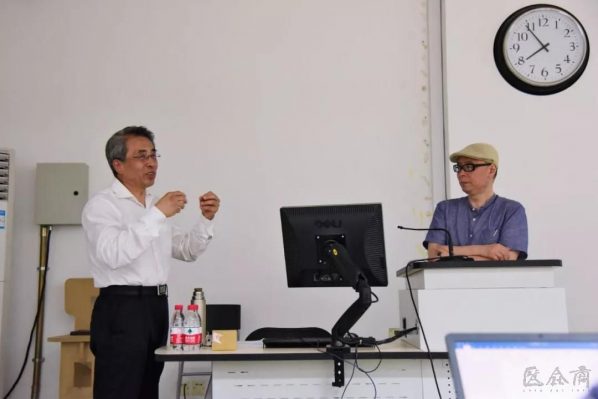 Excavating historical information through the analysis of literary works help us probe deep into the culture of the two rivers region. In the questions and answers session, in response to the problems of ancient ethnic migration, cattle worship, cuneiform interpretation, historical evolution, language structure, cylinder sealing and the relationship between the two rivers and Chinese hieroglyphics, Professor Gong discussed a lot with the public and the whole lecture was fascinating.

1 This translation is based on http://etcsl.orinst.ox.ac.uk/section1/tr1823.htm.