Lawrence Malstaf: The Future of Machine Intelligence and Man-machine Relationship 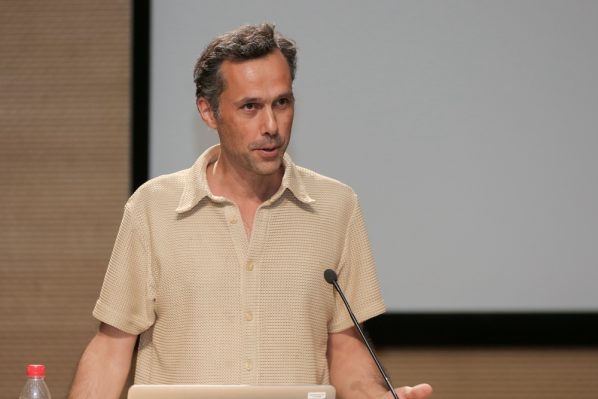 On 8th May 2019, the exhibition Lawrence Malstaf: Extra commenced in the IMS of Modern Art (abbr. IOMA). On the evening of 11th June 2019, the Belgian artist Lawrence Malstaf was invited to deliver a speech in the auditorium of CAFA Art Museum. In Lawrence Malstaf’s lecture, he discussed topics regarding the relationship between humans and the environment as well as humans and machines by taking his artworks as the starting point. Following his speech, Lawrence Malstaf commenced a conversation with Fei Jun, Professor of Digital Media Studio at the School of Design in CAFA, and artist Wang Mai. The lecture was hosted by Doctor Chen Yunbing, the curator of this exhibition.

Malstaf’s professional background is in industrial design rather than visual art. Physics and technology are always used as the starting point and expressional method of his art creations. The Way Things Go, an artwork co-created by Swedish artists Peter Fischli and David Weiss, initially sparked his thoughts on motion and modes of objects and influenced his art creation to some extent. He also involves himself in the stage design for dance and drama to explore the relationship between objects and the bodies of the performers. Malstaf believes that objects in motion do not only contain a particular artistic value but also share a common perspective with dynamic human bodies.

During the speech, Malstaf started with a self-interpretation on his classic works. Shrink, as a work from his early period, explores body reactions in a contracted space. This piece of work is inspired by the process of dancers’ adjusting their bodies before entering the performing state before a show. Dancers need to adjust their limbs and breathing rhythms to confront an unfamiliar stage. Malstaf holds the view that we human beings have always been adapting ourselves to a changing environment in different ways. In the stage of undeveloped technology, humans have to “compromise” with the environment by adjusting themselves; however, nowadays, the environment could be altered to adapt to habits through technology. Shrink represents such a positive effect of self-changing. In the era of technology, we can still make a “compromise”.

In Malstaf’s work Compass, he utilized the relationship between humans and the environment to understand the man-machine contradiction. This piece of work is a body-mounted mechanical device that is forced to turn when the wearer encounters obstacles. If the wearer is arbitrarily opposed to this device, his or her body will feel terribly uncomfortable. Conversely, if the wearer acts gently, he or she will gradually adapt to it. Just as human activities have dramatically influenced the ecosystem, the environment will react upon human beings in return. The harmonious relationship between humans and the environment cannot be reached unless we begin to reflect the behavior of enslaving nature. Similarly, the connection between man and machine is not a master-slave relationship – we still need to “compromise” with the machine produced by ourselves. As Masltaf mentioned in his speech, “We need to regard machines as our descendants.”

While Shrink and Compass provide spectators with reflections from outside and inside of themselves respectively, the work Nemo Observatorium emphasizes a double feeling. On the one hand, audiences who just enter the installation would feel uneasy as they confront the high-speed environment. Initially, viewers might attempt to “understand” and “control” the object, but eventually, they can only give up and accept the environment they are immersed in and become part of the device. On the other hand, viewers outside of the installation are witnessing what is happening inside, which provides a totally different experience.

The works with the themes on human-environment and human-machine require spectators to be fully immersed both physically and mentally. In the installation Transporter, viewers are invited to lie flat on the conveyor belt, which directly transforms their body to the exhibits. It can even be understood that the viewer turns into a work itself. The ignored sensory experience in daily life can be awakened when viewers are fully engaged in this work.

Apart from solo exhibitions and group shows, as “props” or “musical instruments”, Malstaf’s works are also presented in a dramatic stage. Nevel and Tollen perfectly exemplify Malstaf’s stage artworks. Nevel constructs a “maze” that guides spectators either to an adventure or to be involved in an adventure. The continual changing space essentially features theatrical elements. Tollen represents the different movements of gyros – either continuous rotation or immediate stop. The performers will interact with these gyros in various movements.  Malstaf believes that the empathic energy generated by pure physical movements reflects the vitality of objects.

Following the introduction of artworks, Malstaf concluded that there are four principles in terms of his art creation. Firstly, “being in the middle” is the state of Malstaf’s works. After his works are presented, he will adjust or recreate his works based on viewers’ feedbacks. In this case, his works are always in the process of evolution. The second principle is “exhibiting the visitor”. The third principle “performing objects and spaces” could be elaborated on as the continuous movements of artworks themselves. Lastly, artworks are autonomous, and they are not created for the other’s “presence and representation”.

In the dialogue section, Professor Fei Jun inquired about Malstaf’s insistence on creating artworks with physical materials. In response to this question, Malstaf clarified the existence and value of concrete materials. He believes that even visual images require a physical machine to expound the real world and to be disseminated; even the invisible internet is supported by a huge physical generator room. All these examples mentioned above elaborate that both the real world and the visual world are established upon physical entities. Artistic creations are sometimes in need of concrete materials to awaken the unique sensory experience. Malstaf supposed that if a new technology appears to replace physical materials, they could reach the same expressional effect and he would be delighted to use them.

Due to the consideration of ecological environmental matters, Malstaf has already begun to reduce the use of enormous and non-environmental physical materials. He also mentioned that when the visual reality technology is mature enough, in order to reduce carbon emissions, he could even imagine presenting artworks to audiences without any transportation.

Artist Wang Mai expressed his appreciation for Malstaf’s artworks and named his works “grand pieces”. Wang Mai’s point of view is that the development of installation art may not be able to substantially expand, which is only possible for numbers of innovative art forms. To expound his opinion, he took Avatar, a landmark work of film technology, as an example. It provides an audience with a deep impression through a narrative which is independent of text but relies on extremely vibrant visual details.

From traditional paintings to installation art and experimental videos, the form and content of art are changing in line with the development of technology. Nowadays, visual reality technology and artificial intelligence offer new possibilities (in the art field). What amazing changes are going to appear in the future? From Malstaf’s viewpoint, it is unpredictable. Technology does not only affect certain fields; it further shapes the changing forms of the whole world. Malstaf holds a positive attitude towards the world in the future, and he expects young artists to embrace brand new possibilities. 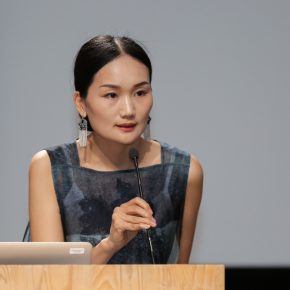 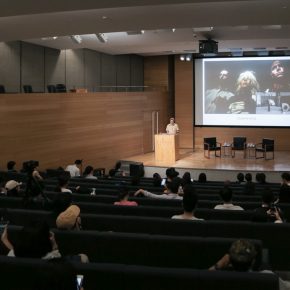 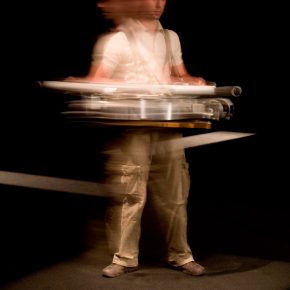 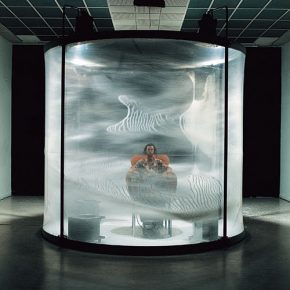 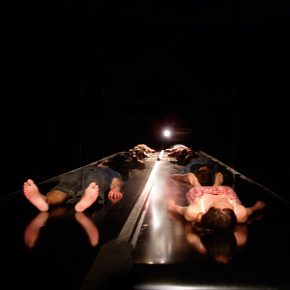 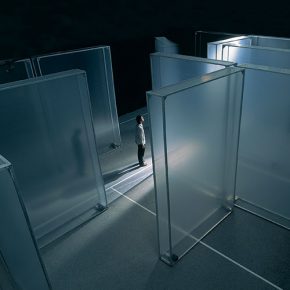 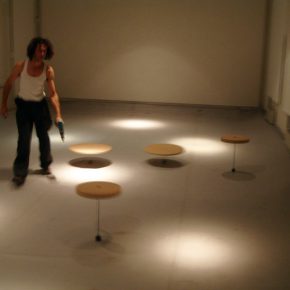 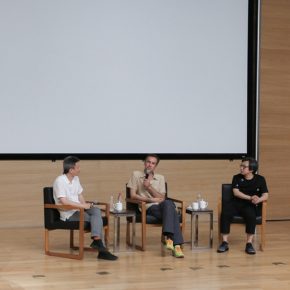 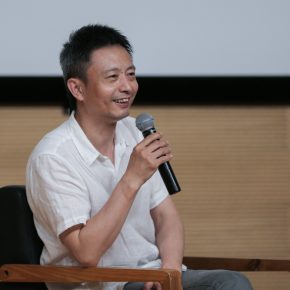 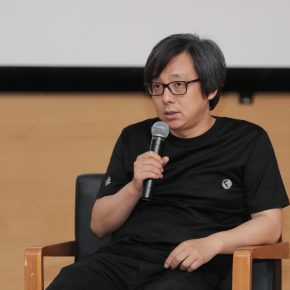 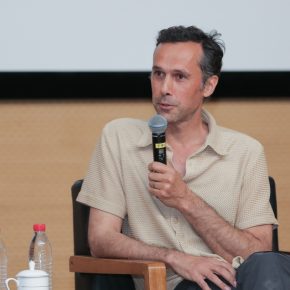 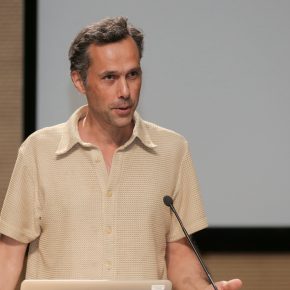