In 2019, in commemoration of the 500th anniversary of the death of Leonardo da Vinci, the cultural center of the Italian Embassy and the Art Museum of the Central Academy of Fine Arts jointly presented a cultural promotional art project “The Art of Leonardo: Opera Omnia”, which ended on 23rd May 2019. In order to interpret this exhibition, the public education department of CAFA Art Museum and the cultural center of the Italian Embassy collectively organized a series of lectures. The final section of the lecture series — “Leonardo e il ‘Libro di pittura’” was held at 6:30 pm on 12th June in the auditorium of CAFA Art Museum with a speech given by Professor Carlo Vecce, a renowned Italian scholar on the history of Renaissance literature and civilization. Professor Vecce researched and interpreted “Libro di pittura” compiled by da Vinci’s manuscripts. He concluded that painting is not only an art form to express reality but a scientific and philosophical study for da Vinci. The lecture was hosted by Gao Gao, the Assistant to the Director of CAFA Art Museum.

There is always an initial question that cannot be avoided when one is attempting to learn about the master da Vinci, namely, how to get close to his work and how to explore the thoughts behind his works? Leonardo da Vinci and his works are household names; however, can we capture meanings behind these exquisite works? As a painter, da Vinci only left a few dozen paintings, many of which were unaccomplished. In this case, it is far from enough to understand da Vinci only through his paintings. Fortunately, apart from paintings, da Vinci left over 15000 pages of manuscripts as well, which turned out to be significant archive material to demonstrate his thoughts.

Leonardo da Vinci recorded his research in the fields of painting, machines, anatomy, botany, geometry, mathematics and architecture among other things in these manuscripts. Although he planned to write a systematic and logical work more than once, he wrote disorderly in these manuscripts — various fields of research would appear on the same page. Francesco Melzi, the last student of da Vinci, sorted out these manuscripts after the death of da Vinci. This young apprentice, born into a noble family in Milan, expressed his profound humanistic quality when he entered da Vinci’s studio to study. He understood Latin and Greek and wrote neatly. Da Vinci announced that he would leave all his books and manuscripts to Melzi in his will. Melzi gradually summarized and refined the contents regarding paintings in the scripts using the method taught by da Vinci, and transformed them into the book LIBRO DI PITTVRA DI. M. LIONARDO DA VINCE PITTORE  (aka. Libro di pittura). The original version of this book is in the Vatican Library.

For da Vinci, painting is not only art creation, but a scientific method to perceive the world. When Melzi edited the book Libro di pittura, he also presented the discussion of “is painting a scientific subject?” at the very beginning. Following this thought, Melzi divided the manuscripts into eight sections.

In the first section, da Vinci contrasted painting with poetry, music, sculpture and other art categories, and concluded that painting was at the top of the artistic hierarchy. Two reasons are behind this conclusion: firstly, painting is a science and belongs to intellectual activities. Secondly, painting is closer to nature which is superior to other art categories greatly influenced by artificial factors.

The second section “The Principle of Painters ” is edification to professional painters. Regarding painting techniques mentioned in this part, for example, da Vinci suggested young painters could gain inspiration in terms of depicting mountains and clouds through the watermark produced by throwing the sponge with water onto the wall. Professor Vecce emphasized that it is a rather contemporary method proposed by da Vinci as early as the Renaissance. Apart from painting techniques, da Vinci also put forward life advice to young painters. For instance, he suggested that artists should always stay alone. “You will completely belong to yourselves when you are alone.”

The third part “The Movement of the Human Body ” focuses on da Vinci’s research on the human body, including dynamic motion processes and static body proportions. During the Renaissance, people began to reconsider the idealistic standard of beauty. They believed that the ultimate beauty was contained in a harmonious proportion of the human body. The ratio was based on the precise calculation of mathematics and geometry. Referencing the discussion of the perfect proportion of the human body by the ancient Roman architect Marcus Vitruvius Pollio in his De architectura, da Vinci created “Vitruvian Man” as the embodiment of the opinion that “man is the measure of all things” in the Renaissance.

The fourth section includes da Vinci’s sketches of the costumes in his early years. Figurative paintings in the Renaissance usually started with nudes, then covered by clothes using paintbrushes. The depiction of Da Vinci’s “The Adoration of the Magi” followed this process.

The fifth section on“The Discussion of Light and Shadow” expands the topic by focusing on the optical and visual perceptions in painting. This chapter is the largest-scale and most closely connects to science in the whole book. In these manuscripts, da Vinci represented vivid light effects on human bodies, mountains, clouds and trees through painting. The term “Chiaroscuro” (technique employed in the visual arts to represent light and shadow as they define three-dimensional objects) in Italian firstly appeared in these manuscripts.

The last three chapters refer to various elements which are easily ignored but are indispensable in da Vinci’s paintings. The motifs of trees, clouds and horizons are frequently mentioned. Da Vinci meticulously studied various forms of these elements which could be explored through trees in “The Adoration of the Magi” and clouds and horizons in “The Virgin and Child with St. Anne”.

In 1651, the first edition of Libro di pittura was published in Paris. Apart from the manuscripts of da Vinci sorted out by Melzi, it also included illustrations according to da Vinci’s scripts created by renowned painters in Paris at that time. Since then, da Vinci’s philosophies of painting have been broadly disseminated in Europe, and the book “Libro di pittura” has turned out to be a necessary textbook in all art academies in Europe. In the 17th century, missionaries who were accepted by the Chinese court, such as Giuseppe Castiglione studied Libro di pittura. This was an encounter between western and Chinese art.

Professor Vecce holds the view that “Libro di pittura” edited by Melzi cannot fully represent da Vinci’s initial logic. He pointed out that da Vinci discussed paintings for the first time in around 1490. At this time, he concentrated on the proportion of the human body and the relationship between light and shadow. Meanwhile, da Vinci began to accept disciples and he interpreted complicated painting techniques (i.e. depicting war scenes, storms and a dark night) to him.

The meticulous study of different motions of a specific part of the body in da Vinci’s scripts was his preparation for paintings. In the manuscripts of the same period of the creation of “Annunciation”, there were numerous experiments of various types of smocking. When creating “Lady with an Ermine”, he studied various movements of a human head in detail. Da Vinci also recorded all the forms of the human nose he could imagine in another script.

Professor Vecce also traced the idea of “painting is science” through the academic source. The recent studies indicated that apart from painting, researching and writing, da Vinci was keen on reading as well. He possessed a considerable book collection, which perhaps includes Leon Alberti’s On Painting. Leon Battista Alberti is a 15th-century Italian humanist who enjoyed a great reputation in the architecture field and once designed the façade of Basilica di Santa Maria Novella. In On Painting, Alberti conducted an in-depth study of perspective, which influenced the linear perspective study during the Renaissance to a great extent. It also affected da Vinci’s consideration in terms of the relationship between painting and geometry.

In addition to the study of geometry, da Vinci showed his interest in the infinite concept in mathematics as well. During his study process, the mathematical infinite concept has been transformed to a philosophical opinion – “infinite” is something that never ends. Da Vinci represented this philosophical notion in his paintings, such as “Mona Lisa” and other works in his late period. In these paintings, the boundaries between characters and landscapes are gradually merged, which demonstrates the philosophical concept developed from the endless movement of life and nature.

The painting was not regarded as high art until the early Renaissance due to the need for manual labor in the process of coloring and drawing. During the High Renaissance, humanists such as da Vinci empowered painting with a sense of supremacy. In da Vinci’s point of view, the aim of painting is to represent reality, which takes enough understanding of reality as a premise. In this case, painting has been turned out to be a scientific way to study the world.

In the last Q&A section, Professor Vecce furthermore interpreted the representations and color-expression techniques in da Vinci’s paintings. Da Vinci regarded art as a method to represent the world; however, he did not fully “reproduce” the reality in his works. Professor Vecce believes that da Vinci’s “representation” is not exactly the same as the reality, but to recreate a reality based on observation and reflection to the world. Besides, in da Vinci’s viewpoint, the boundary between artistic creation and representation should not exist due to the endless movement of life and nature.

Most contents of Libro di pittura are based on sketches as they enjoyed a more significant status in the High Renaissance if compared to color. However, the use of colors cannot be ignored in da Vinci’s paintings. Professor Vecce introduced that apart from da Vinci’s long-term practices in painting, he was also influenced by Aristotle’s discussion in terms of color. Unlike the common techniques of coloring which mix various pigments to meet the different color requirements in paintings, da Vinci colored layer by layer on the canvas. Through the detection of modern techniques, the time interval between different layers in da Vinci’s paintings was as long as several months even several years. “Mona Lisa” is a typical example of painting overlaid by different layers of pigments.

Photos of lecture scene by Hu Sichen/CAFA ART INFO, Other photos courtesy of the speaker 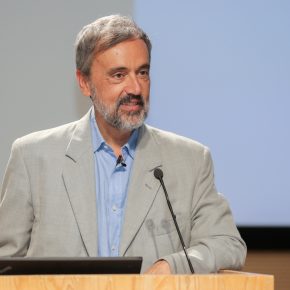 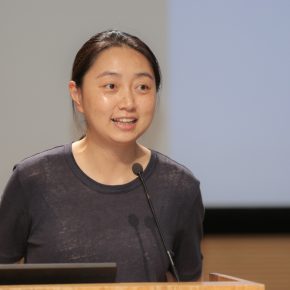 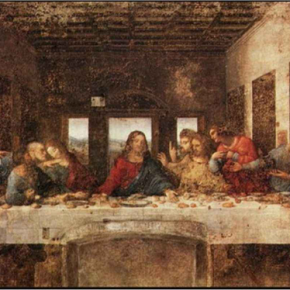 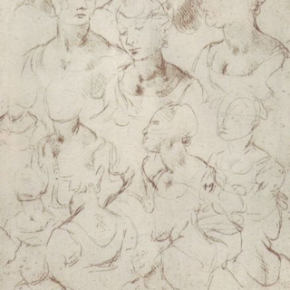 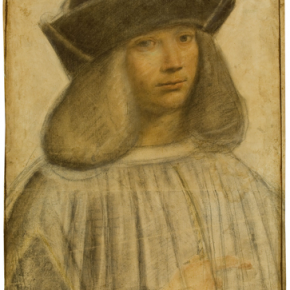 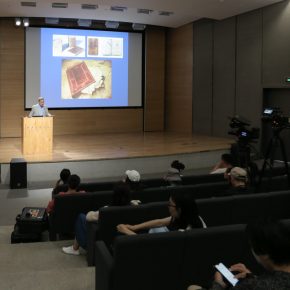 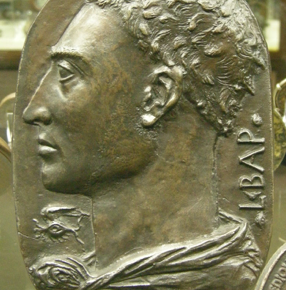