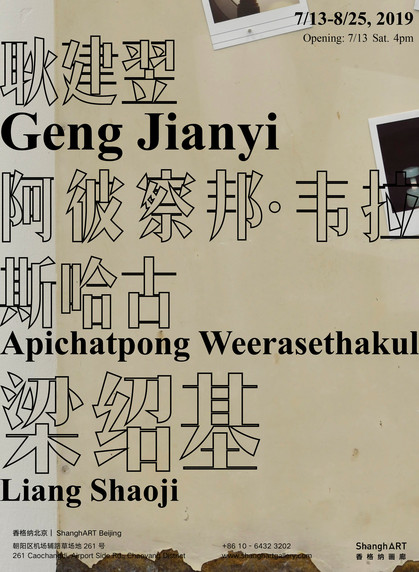 Opening on 13 July, ShanghART Beijing is pleased to present three significant (series) works by renowned artists Geng Jianyi, Liang Shaoji and Apichatpong Weerasethakul. Demonstrating the artists' bold experimentation and challenge of different artistic languages, this exhibition recontextualises these three (series) works and allows them to be in conversations with each other.

Known as a seminal figure of the avant-garde art movement and one of the most influential conceptual artists in China, Geng Jianyi's Door series will be on view in this show, which was also included in the opening exhibition of our Beijing gallery eleven years ago. Through the readymades - eight old refrigerator doors, the artist is able to convey his critical thinking of everyday life: this kind of imported goods marks the end of a era of cellaring. Attached to these items, the Polaroid photographs nevertheless examine the relationship between individuals and the world, and reveal Geng's sustained exploration of identity throughout his career.

Spiritual subjects, such as memory, dream and soul, weave their way into Apichatpong Weerasethakul's artistic output. In his 2018 single-channel video Blue, a woman that lies under a blue sheet suffers from insomnia at night, while a set of theatre backdrops unveils two alternate landscapes nearby - at the threshold of consciousness, the theatrical scenery forges a transitional space between corporeality and incorporeality. The flicker of firelight upon the blue colour - hushed and yet unsettling - draws viewers into an intimate, mysterious vision, so as to provoke their potential intuitive awareness.

Also presented will be a large-scale installation titled Guiguzi (2009) by Liang Shaoji, which is considered as one of his major early works. Similar to the sensitive and vulnerable nerve endings of human being, this work creates a maze-like configuration in the air with silk and iron wires. Honoured as "the hermit of art", Liang has indulged in the entire life cycle of silkworm for over three decades which accounts for his unique subject matter and materials. Silkworm is a language of nature; characterised by this creature’s growth and spinning, Liang's working method is filled with a sense of meditation. As the artist notes, "silk resembles a visible reflection of the knotting point of time and life - the imprint of being and beings. It generates 'unity', which refers to the origin of heaven and earth, the lord of creation…"

Courtesy of the artists and ShanghART Beijing, for further information please visit www.shanghartgallery.com.