Li Yousong’s work is quite unique as this impression stems from a comparison—reviewing the current trend of seeking the new and alien high-tech or pursuing abstract creations. He makes use of a method close to “story painting” to narrate. His creations originate from his personal memories, and with the integration of the realistic and imaginary structure, he has gradually formed a personal aesthetic in pursuit of a “painting / authoring” mode, showing a valued charm in the narrative of art. His latest solo exhibition “Story—Li Yousong’s Artistic Creation and Life” was unveiled on June 21, 2019 at FEEFAN’S ART. Li Yousong is like “Mr. Storytelling”—but he uses his brushes to replace the language, “Chinese Acrobatics in Manhattan”, “Stein’s Treasure”, “Lighting—Kunlun”, “The Painting of Magic Performance in San Francisco”, and so on, a series of mysterious, gorgeous, thrilling, absurd story paintings are slowly showcased.

It is worth mentioning that the exhibition has specially set up a corner “drawing studio” and is equipped with a large number of hand-drawn drawings and concept drafts. It is obvious that the exhibition intends to present the real creative scene and working status of artist Li Yousong, which also provides a case study for the audience to understand Li’s creative methods for his storytelling. There were some magazines scattered in the corner of the workbench. When I opened them, there were some advertisements from the 70s and 80s in Europe and America. There were scattered collections of comic books, picture books, and Art Deco paintings. Factory advertisements of pastry, Chinese records, small plaster reliefs, and ornaments from the 70s and 80s pasted on the wall. According to the trendy understanding, these suggest the artist’s individual characteristics—that is his creation output and life experience are mutually infiltrated, or the focus is more detailed. Li Yousong’s memory is the continuous inspiration and nutrition for his creations.

Acrobatics, stage, juggling and other on-site scenes are commonly used elements in Li Yousong’s paintings which are directly related to the influence of his father. In the 1960s, his father graduated from the Conservatory of Music, then served as a band conductor in the Acrobatic Troupe, thus fresh stories of his father’s performances, pictorial and packaging advertisements brought back from the United States in the early 1970s, were related to Li Yousong’s deep impressions from the Acrobatic Troupe when he was a child. Fragmented images of his memory were intersected with a strange fantasy in his mind, the reality and fiction were combined through the coding of intelligence to constitute a kind of composite image mode. Li Yousong “records them” and adjusts them again and again to compose a painting album.

One of his representative works “Chinese Acrobatics in Manhattan” originated from his memory at the age of four or five. According to his father’s performance experience in New York, he adapted his work to represent a Chinese acrobatic actress that was hijacked in New York. Like another work “Stein’s Treasure”, it is done by one person from the structure of the story to the painting. These two sets of representative works use a three-stage comic frame. The retro color scheme, fine props, live scenes, and continuous plots are all linked by a clue. Through the acrobats’ perspective, spectators are brought back to the living appearance in the 1970s. On the one hand, the retro style of the artist is revealed. On the other hand, it also presents a recollection of the traces of history from a personal perspective. The past, reality and illusion are intertwined to form a graceful horizon of images.

In an interview conducted by CAFA ART INFO, Li Yousong admitted that he did not have much feelings about what happened at that moment, but he was absolutely fascinated by the fragments of memory in his mind. The image of “Lighting—Kunlun” series comes from his dreams. During the process, one or two pattern fragments were repeatedly flashing in his mind. Li Yousong drew them down immediately and framed them in a personalized way—the image precedes the text, which constitutes the whole picture book. His work was also published as “The Kunlun Meteor from Fallen Comets on Earth”, which is a collection of the artist’s enthusiasm for history, religion, architecture, astronomy, martial arts, etc., “the meteorite universe, the Qing court, the Chinese and Western elements” and other hot sci-fi IP elements are integrated here. Li Yousong outlines a vivid mysterious world with simple pen watercolors. As Zeng Zirong, Executive Director of the CITIC Museum of Art, commented: “The whole comics are as various as a kaleidoscope and it’s splendid like a montage. It is worthy of being a film on paper created by him alone.”

In addition to the series of important story paintings, the exhibition also presents a number of high relief works. The series of “The Painting of Magic Performance in San Francisco” is an important representative of the stories. Its background was adapted from the anecdote of the Chinese folk juggler Zhu Liankui who had a magical fight with the American magician William Ellsworth Robinson on the stage in San Francisco. His artistic ability to reconstruct the plot and pictures was also revealed. Li Yousong’s unrestricted techniques are also realistic in his practices. The creative technique is just a way of his expression. Watercolor, pen, toner, sketch, etc. are all his tools. In this series of “The Painting of Magic Performance in San Francisco”, he uses “Tempela” which is commonly used in the Western painting system and implies the research signs of fine paintings and murals in the academic system, presenting an elegant, mysterious and advanced texture. It is not difficult to see from Li Yousong’s strokes, history is not cold and stories are not confined in the past, wisdom and imagination act as a support, with a new perspective he can gain fresh and interesting viewing, and that is the external force of artistic vitality.

A story is the earliest way of communication, carrying people’s imagination and pulling people into a whimsical world. The ancient guide to action contains the most primitive aspirations of people. It embodies a tacit communication and mode of interaction between people, and also gives the reality a transcendental imagination. His teacher and artist, Mr. Chen Wenji, said: “Li Yousong is more focused on finding his own aesthetic position in the lost time and space, but his artistic attitude is still positioned in the contemporary context system. The irreversible era is in his works and has become a solid specimen of the era, or like a scene of social science. Of course, these are still visual art works worthy of appreciation and reading, since the artist’s wisdom and humor can always guide the viewer. While falling into meditation is the horror, he looks for affirmation in the accidental.”

Today, Li Yousong tells the story in the form of a picture book. Aesthetic pursuit and artistic thinking run through it. He draws nutrients from memory and life, and converts them into another script, which spreads to more viewers and readers. In a frame of heaven and earth, there are many relationships such as “deeds and things”, “people and things”, “history and the present”, “memory and imagination”, etc., showing aesthetic pursuit, realistic thinking and a philosophy on life in the unconventional picture, compared to stereotypes and deliberately mystifying. This way, may be more fascinating.

It is reported that the exhibition will be on view until August 4.

Text and Photo by Zhang Yizhi, translated and edited by Sue/CAFA ART INFO

Work Photo Courtesy of the Artist and FEEFAN’S ART 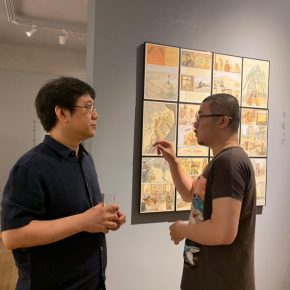 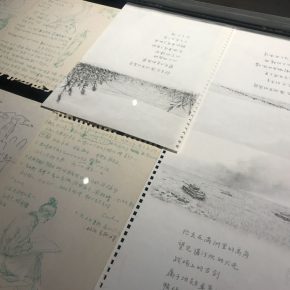