RongRong was a key figure in the emergence of an alternative to the academic and highly successful movements in painting such as Political Pop and Cynical Realism that first claimed critical attention in the 1990s, as a photographer who in his first sustained body of work documented the activities of a group of daring young artists who lived and worked in run-down part of Beijing that soon became known as the East Village. Shortly after moving to the East Village RongRong met most of the artists and musicians – Zhang Huan, Ma Liuming, Zhu Ming, and Zhu Zhou among others – who were to become his major subjects in the ensuing eighteen months. In a letter to his sister he wrote that “now I use Zhang Huan, Ma Liuming and other East Village residents as my models. I am not only recording their performances. I also have my own ideas and opinions. I think that holding a camera in my hand enables me to move away from reality.” This loosely-knit community was short-lived, however, as after Ma Liuming’s performance on June 13, 1994, the police arrested some members of the community for alleged obscenity, and also evicted some other Village artists, including RongRong, from their rented shacks. After they dispersed RongRong continued photographing their group projects and individual performances. He was not alone in documenting the short but colorful existence of the Beijing East Village but his photographs are exceptional for their dramatic lighting and composition.

Of the same generation as RongRong, Song Dong and Yin Xiuzhen rose to prominence in the 1990s with a wide-ranging practice that included assemblage, performance and video as well-as hybrid variations of their own invention. As a married couple they had independent careers until 2002 when they agreed to collaborate for the exhibition Chopsticks at Chambers Fine Art. Prominently displayed in the exhibition that included three-dimensional objects as well as an audience-participatory work was a large photographic mural Beijing 360 Degrees. Both born in Beijing and totally familiar with its ancient history and all the stages of its transformation into a megalopolis, they portrayed themselves on the top of Jingshan Mountain, an artificial hill to the north of the Forbidden City in Beijing. Seven months pregnant at the time, the couple are seen presenting the world in panorama to their unborn child. In spite of its conceptual nature, there is a strongly personal element in all aspects of their work.

Hong Hao majored from the Printmaking Department at the Central Academy of Fine Arts, Beijing (CAFA), gaining widespread acclaim for his witty and technically complex prints. However, photography soon became an essential tool for the documentation of his environment and of his own performances, quite different in kind from the endurance tests of the East Village artists and He Yunchang. In the My Things series Hong Hao described his process in the following words: “Scanning the real objects is the method of My Things series to show the attraction of details. Things of daily use including day-to-day products, trash, my collections, tickets and certificates. I placed all those things that I used and touched every day in the scanner. After processing by computer, I made the photo with all things at their original size. I’d like to make them as a revivification and live show of the life of today.” A decade later in Elegant Gathering, he utilized his considerable computer skills in the creation of a series of ambitious photographic works in which traditional Chinese ink paintings depicting scholars’ gatherings in gardens are updated by the insertion of contemporary personalities and accoutrements.

Wang Tiande and Hong Lei, both also immersed in traditional Chinese culture, turned to photography as a means of re-imagining this long-lost world in contemporary terms. Gu Shan Mountain, 2006, is exceptional among Wang Tiande’s works in that it is a photographic exploration of thematic content that underlies his ongoing experimental ink painting practice in which a crucial aspect was the addition of characters burnt into the surface. Art critic and scholar Zheng Shengtian has described how “every time Tiande burns paper, “ashes of words” remain on the floor of his studio. Now, he piles up these ashes in the shape of mountains. Them by using a camera and computer, he recreates remarkably lifelike landscapes. At first glance, this is merely playful, but in reality it embodies deep philosophical meanings. The ashes of traditional culture, re-made by the artist, are given infinite vitality.”

Hong Lei created some of the most unforgettable photographic images of the 1990s, especially Autumn in the Forbidden City (West Veranda), 1997 and Chinese Landscape (Zhocheng Gardens), 1998. In these manipulated photographs of the supreme symbol of Imperial power and traditional Chinese gardens, Hong Lei gave expression to a wide range of emotions, admiration for the great achievements of the past and regret at their present degenerate state achieved through exaggerated color contrasts in which red predominated. In his second exhibition at the gallery, Transmitting the Ancient, Hong continued his exploration of the vexed relationship between past and present in contemporary China. Whether he was traveling to the original sites of Song dynasty paintings to frame the exact views as they exist today or recreating still-life motifs with artificial flora and fauna, Hong lei created works that are memorable for their technical finesse and for the way in which he is able to fuse multiple layers of cultural reference in his photographs and installations.

Two to three decades after they were created the photographs of these five artists give a compelling picture of the multiple currents affecting the course of the development of contemporary art during a crucial period. 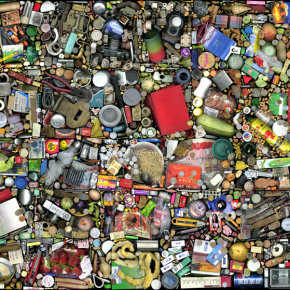