Born in France and raised in the USA, Niki de Saint Phalle (1930-2002) was one of the most legendary women artists of the 20th century. She appeared on the art world scene in the early 60s as the only female member of the Nouveaux Realistes in Paris. She had no formal art education but learnt from her family and travels, she was also deeply influenced by numerous artists from the Middle Ages to Matisse and Pollock. In her mid-twenties, she suffered a major nervous breakdown and was hospitalised. Niki began creating art as therapy and voice to express her anger and hope in a primitive and experimental style using symbols like animals, monsters and female figures. Saint Phalle created a series of works in the early 1960s that were featured in her first exhibition Tirs (Shooting Paintings). She suspended bags of paint in front of the white-painted assemblage and shot the assemblage with a pistol or rifle, causing the bags filled with paint to “bleed”. In 1963, she created a series of sculptures protesting stereotypical societal roles for women as brides, birth-givers and prostitutes. Over time, her Nanas became more joyful, whimsical and colourful: she decided to glorify and liberate women. Saint Phalle used to be a fashion model in her teens and was very skinny herself but wanted to celebrate the female curves as well as women of all shapes and forms. These sculptures broke free from the social constraints imposed on women and advocated for universal empowerment for all women.

In the 1970s, Saint Phalle began ambitiously working on large scale architectural public art projects. At this point of her life she wanted to create works that would bring joy, humour and colour to people’s lives. To name a few examples: in 1972 Saint Phalle was commissioned to build a giant sculpture in Jerusalem and created a monumental dragon with 3 tongues, depicting 3 religions, for children to play together. In 1983, after receiving the invitation from French president François Mitterrand, Saint Phalle and Jean Tinguely created the Stravinsky Fountain in Paris. From the late 70s, Niki initiated the famous Tarot Garden (1978-1998) in Tuscany, Italy, with her artist and architect friends. This ambitious project with buildings and monumental sculptures based on Tarot cards became a lifetime signature project of Niki until she passed way in 2002. 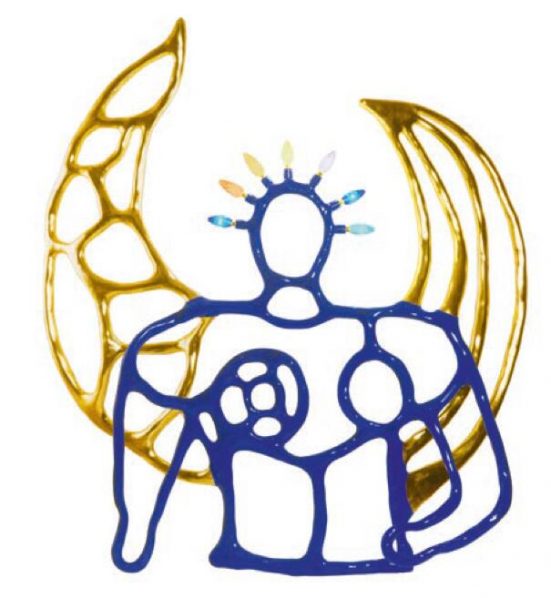 She also produced design objects that went against the aesthetic of functionalism and challenged the usual narrative of Modernist design. In 1980, Saint Phalle began creating a series of polyester snake chairs, vases and lamps. In the early 1990s, she returned to the United States due to health reasons where she lived until her death in 2002. During her decade in the United States, Saint Phalle built a new sculpture garden: Queen Califia’s Magical Circle (1999-2003) which is her last public artwork.

Like a phoenix, Niki de Saint Phalle always rose from her ashes. She struggled with mental and physical health but found a way to heal through her art. As she declared in a drawing near the end of her life, “La mort n’existe pas/Life is eternal” (“Death doesn’t exist/Life is eternal”). Niki lived through her art and became a symbol of women’s free will, love and hope.