On 10th July 2019, the exhibition “Leandro Erlich: The Confines of the Great Void” commenced in CAFA Art Museum, which features Argentinian artist Leandro Erlich’s 20 large-scale interactive installations created during the last 25 years. This exhibition, known as the largest solo exhibition ever in Leandro’s art career, showcases many works that are revealed to the Chinese public for the first time.

Following the opening ceremony, on 11th July 2019, “Dialogue: Expect the Unexpected” as the first event of the series of academic activities for this exhibition, was held in the auditorium room of CAFA Art Museum. Andrés Duprat, Exhibition Curator and Director of Argentina National Museum of Fine Arts (aka. The Museo Nacional de Bellas Artes), Qiu Zhijie, Dean of the School of Experimental Art at CAFA, Wang Min’an, Professor of the School of Humanities at Tsinghua University, Zhang Zikang, Exhibition Curator and Director of CAFA Art Museum, Zhou Yufang, Vice Dean of the School of Architecture at CAFA, participated the event. The dialogue was hosted by Wang Chunchen, Vice Director of the CAFA Art Museum.

The Director of Argentina National Museum of Fine Arts Andrés Duprat shared his expectation of the audience. He hoped that viewers could observe the exhibition based on their purely personal experience rather than theoretical knowledge. He believes that visual art could transcend the boundaries of language and culture to communicate with audiences directly in a mental sense. Therefore, the interpretations by curators, critics and other intermediaries within art museums and education systems are unnecessary for audiences.  In Andrés Duprat’s viewpoints, at least two issues are behind these alleged professional interpretations. First of all, the process of interpretating of artworks is similar to translation; yet either translation or paraphrase would lead to the loss and deterioration of information. Secondly, authoritative points would strangle the ability of independent thinking of audiences and result in the convergence of understanding artworks. Leandro Erlich also emphasized the significance of independent thinking of viewers. “I am cautious in terms of making interpretations of my works as my explanations might restrict viewers’ thoughts. I would like to leave more space for them to explore the potential concepts behind my works.”

Artist Leandro Erlich introduced his creative ideas through two starting points behind his works, namely, breaking the mindset and facilitating the communication. In his viewpoint, the process of accumulating knowledge and experience exists in the development of human cognition. During this process, the mindset in terms of understanding the world is gradually formed. However, kids always overstep the mindset and break the boundary between normal situations and expectations. By observing the way that children perceive the world, Leandro creates artworks through returning to the basic level of human perception. Generally speaking, art always transcends the restrictions of conventional thinking while actively questioning and breaking boundaries as well. Leandro pointed out that “communication” as the other theme of this exhibition, not only refers to the dialogue between audiences and artworks but also integrations between viewers themselves. He took the experience of viewing and interacting with his work “The Swimming Pool” as an example to elaborate his opinion furthermore.

Qiu Zhijie observed Leandro’s artworks from another perspective. He pointed out that “interaction” in this exhibition was over-emphasized, which might result in the impression that interaction is more significant than the delivery of concepts in Leandro’s artworks. In Qiu Zhijie’s opinion, he took an interest in non-interactive parts ignored by the public discussion in Leandro’s work. He pointed out that the problem of over-interpretation exists not only in this exhibition but is also a normal condition in contemporary art. Therefore, Qiu Zhijie questioned the concept of interaction in this exhibition. He used the VR technique to reflect on the notion of interaction. First of all, the immersive effect of VR would partially deprive people’s ability of active thinking, which might cause ideological inertia. Besides, if social differentiation continues, VR might be used to comfort people at the bottom of society who never experience a good life. In this exhibition, some works are non-interactive so that they could not attract a great number of audiences; thus, concepts behind these works are difficult to convey to the public.

Wang Min’an interpreted Leandro’s artworks from three perspectives, namely, Space Theory, Perception and Heterotopy. He believes that memory and perception are inseparable with each other, and each perception exists with the previous memory. Therefore, when observing Leandro’s artworks, audiences’ perception of his works and the perception of space are misplaced, which might result in a sense of expectation. From this perspective, Leandro discusses the philosophical problem in terms of the breakage of memory and the current cognition. Besides, Wang Min’an holds the view that the atmosphere of “The Confines of the Great Void” elaborates Michel Foucault’s notion of “heterotopia”. Viewers immersed in this space would completely get rid of the daily life experience to gain a de-familiar experience.

Although using architecture as one of the creative methods, Leandro’s artworks are different to buildings in general. Zhou Yufang has pointed out that there is not much space for self-reflection in daily life architecture; however, in Leandro’s works, he utilizes a number of specular reflections to enable the self-examination in a heterogenous space. The public is shooting pictures and sharing them with each other in front of Leandro’s installations. That is one of the reasons that his works are easily disseminated around. “’Images’ are part of Leandro’s products, and this particular product is formed based on each individual’s intervention.

“The Confines of the Great Void” has broken regular exhibition modes in art museums with a strong interactive identity. Its popularity among the public has triggered a discussion in terms of its position between academic and commercial perspectives. Zhang Zikang, Director of CAFA Art Museum, has pointed out that the alleged “Internet celebrity”can only prove the exhibition’s success in raising concern among the public. It does not mean wakening its academic value. Taking and guaranteeing the academics as the premise, the existence of commerce is worthwhile. In Zhang Zikang’s point of view, Leandro’s work broadens people’s perceptions in terms of art and enables audiences to rethink the relationship between possibility and impossibility, reality and illusion, as well as ordinary and un-expected. “Leandro’s artworks enlighten us to think in cognition, to build up new knowledge while thinking. It also illuminates the direction of the education system in the future.”

In addition to the topics discussed above, participants in the following dialogue and Q&A sessions deeply discussed topics such as cultural symbols and the contradictory relationship between reflection and immersion etc. As an Argentine artist, Leandro creates his art without involving unique national identities. He references various local architectural styles in exhibition sites to design works adapted to the local culture instead. Thus, his works are able to develop a dialogue with the local culture.

Is there a contradiction between independent thinking and immersive experience? Some audiences raised this question in the Q&A session. When viewing Leandro’s artworks, the strong interactive identity would indeed attract most of the viewers’ attention. In this case, it would squeeze the time for reflection in terms of deep meanings behind artworks. In Leandro’s perspective, independent thinking and interactive identity are not contradictory with each other. First of all, immersing in artworks and reflecting on meanings behind artworks are not required to happen at the same time. Instead, one could think and reflect when he or she leaves art museums. Secondly, thinking is diversified, thus interaction and feeling themselves could trigger reflections as well. 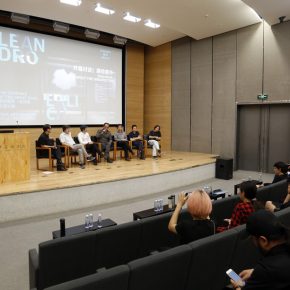 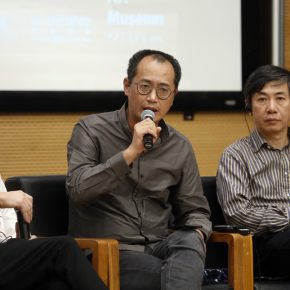 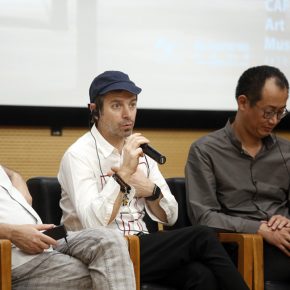 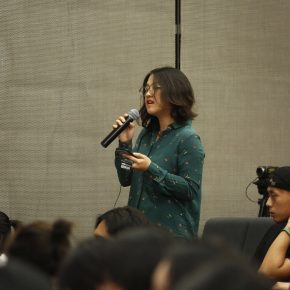 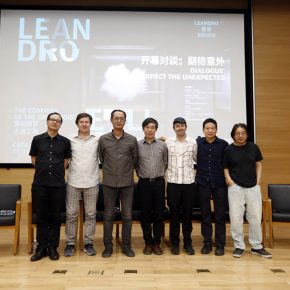