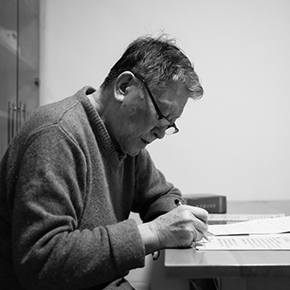 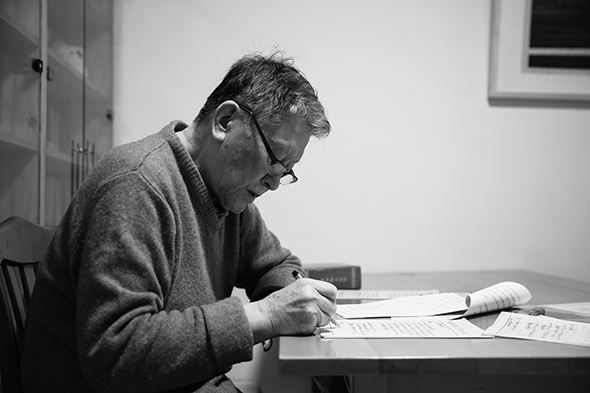 In 1933, Song Yuanwen was born into a peasant family in Liaoning province, China. Although his family lived through turbulent times, his parents tried by all means to provide him with the opportunity to go to school. As his grandfather loved painting and calligraphy, Song Yuanwen was exposed to some basic painting techniques and observed art from a young age. In the 1940s, with the start of the revolution, the emerging Chinese printmaking movement became deeply rooted in revolutionary propaganda work. Song Yuanwen often read promotional material in newspapers subscribed to by his school and they became the textbook for his enlightenment into printmaking art. In 1948, Song Yuanwen joined the art team of the Liaoning Baishan Art School. In 1949, he joined the stage design team of the Liaoning Provincial Cultural and Art Troupe. In the following years, he was first transferred to the Literary Federation of Liaoning Province, where he was the art editor of Liaodong Literature and Art, and later he transferred to the Art Group of Liaodong Popular Publishing House and Department of Fine Arts, Liaoning People’s Publishing House.

Qi Fengge talked about Song Yuanwen’s printmaking in his article “Deep and Serene Context, Grand and Wide Atmosphere—Appreciating Mr. Song Yuanwen’s Prints”. He thinks that Song Yuanwen is good at expressing his emotions in his prints as they are conceived with ingenuity and are profound in meaning; the momentum is grand while the details are fine and meticulous. He emphasizes intuition and sensibility while taking sensitive perception as the main criteria and emphasizes rational thinking to deepen the connotation of his work. Appreciation of his works offers people a lot of inspiration: about landscape themes and social contexts, realistic language and emotional expressions, intuition and rationality, grandeur and subtlety, the static and the dynamic, the simple and the complex, these seemingly simple though actually esoteric contradictory categories, which are both opposite and unified, are well balanced in his artistic practices, all of which cannot be achieved in a short time.

As Fan Di’an, President of the Central Academy of Fine Arts, commented in his speech for “Song Yuanwen Solo Exhibition: with a wide range of vision, modeling the remarkable development in printmaking”: Mr. Song Yuanwen regards the people as his supporting parents, thus he takes his own artistic creation as a feedback to the people. This artistic spirit always dominates his artistic practice. From the 1980s to his later years, his art was solid and broad, and he used a combination of realism and symbolism to refine the language of aesthetics in his life and contributed many new works to the painting world. His creative passion is so strong that his printmaking language is constantly maturing. He adheres to the people-centered creative direction and the pursuit of down-to-earth and excellence in art, which is a valuable and fine tradition in the development of the Central Academy of Fine Arts.

Mr. Song Yuanwen has always taught and educated people with his gentleman-like style which benefited the later generations as he has been engaged in education and teaching using strict and meticulous methods in his study. From 1986 to 1993, he served as the Director of the CAFA Printmaking Department. On the basis of the printmaking teaching pioneered by several predecessors, he broadened the teaching pattern, strengthened the construction of disciplines and studio teaching mechanisms, enriched the teaching content, and included photography, design and composition as supplements to printmaking teaching, which are also integrated into the teaching techniques of various categories of printmaking, which makes the principles of printmaking teaching more prominent. He attaches great importance to the training of difficult, and precise work, including skill and literacy in teaching, paying special attention to strengthening creative teaching while encouraging young students to learn from the advantages of foreign art, an in-depth study of cultural traditions, and a persistance in life, so that the talented training in the Printmaking Department keeps up with the epochal development. His creations do not just display the main theme of Chinese literature and art in creations, but also encourages the exploration and innovation in the language of art ontology and he has cultivated a large number of outstanding artistic talents.

Courtesy of the artist, edited and translated by Sue/CAFA ART INFO 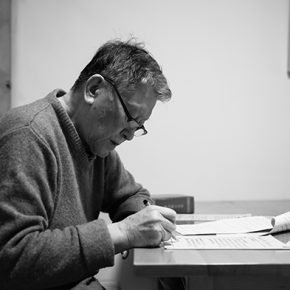