In 1949, the year that People’s Republic of China was founded, Ma Changli was admitted to the Department of Painting, China Central Academy of Fine Arts, and was under the supervision of Ai Zhongxin, Dong Xiwen, Dai Ze and other professors. During his study in CAFA, he laid a solid foundation in basic painting skills. According to Ma Changli’s recollection, due to the needs of national conditions in the early days of the founding of the New China, except for sketching courses, New Year pictures, comic strips, propaganda posters were also included in the curriculum at that time. However, oil painting, as an exceptional case which was gradually explored by Ma Changli after he graduated from CAFA and later became a teacher there. 1

In 1959, Ma Changli and Wen Lipeng were both selected as candidates to go for the Soviet Union for postgraduate study, but they did not succeed in attending the study trip due to the breakdown of Sino-Soviet relations. Later, they were both accepted by “The Class of Oil Painting Research” led by Professor Luo Gongliu who had just finished his education abroad and returned to China in 1961. Influenced by the view on the nationalization of oil painting proposed by Luo Gongliu, Ma and Wen started to explore the fusion of Western oil painting skills and the spirit of Chinese culture. In the essay The Paean to Nature, Wen Lipeng recalled the experience when Ma Changli and himself were supervised and guided by Luo Gongliu, and he was impressed by Ma’s exploration in terms of the nationalization of oil painting in China during and after this study period. Mr. Wen Lipeng stated, “the painter Ma Changli successfully carved out his own way.” 2 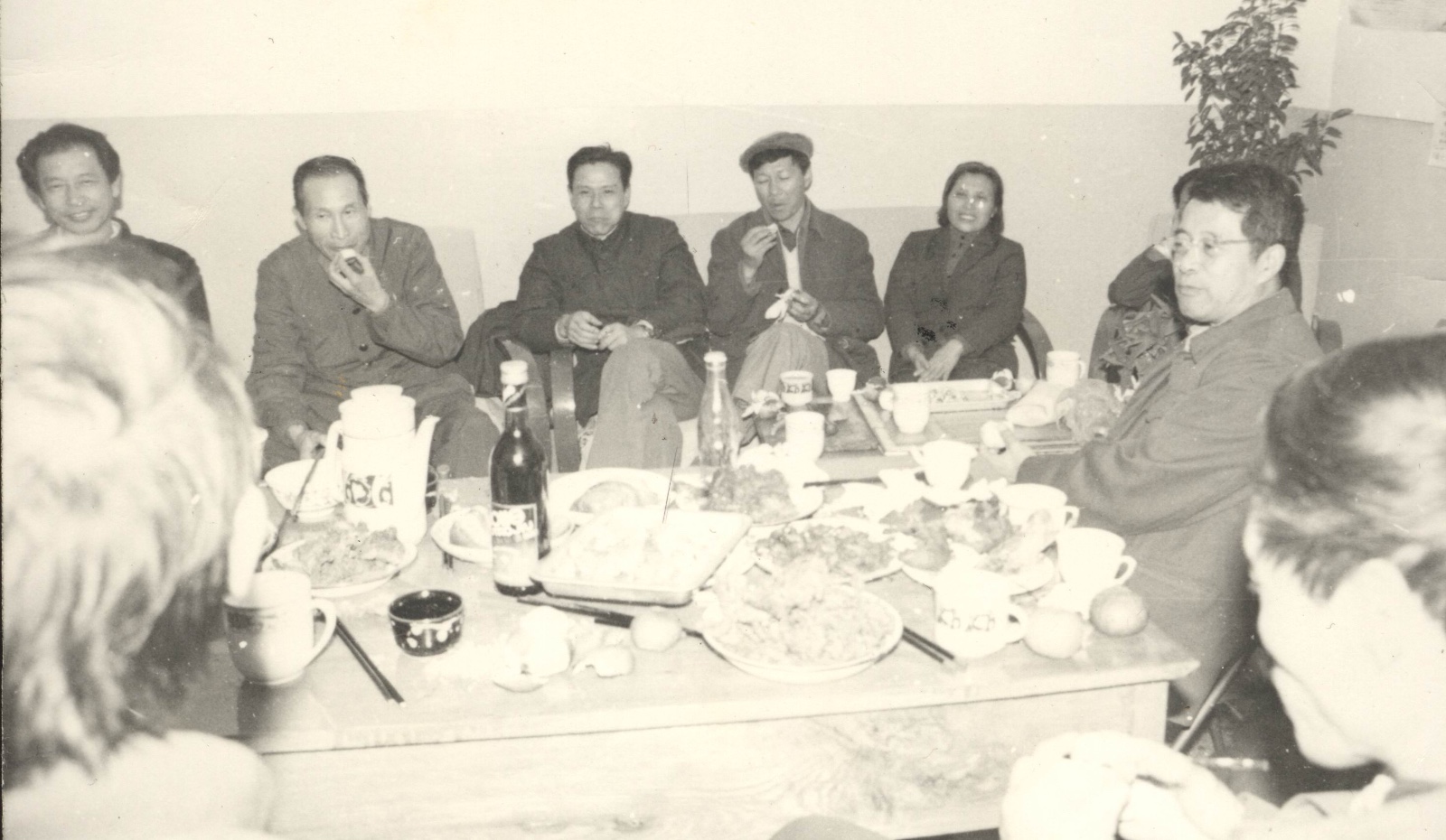 This path that was established by Ma Changli was in line with the development of New China. It unravels many times the glory won by Ma Changli, while undoubtedly indicating the confusion of creation several times due to the requirements and restrictions of the times and the politics. Coinciding with Ma Changli’s 90th birthday, on 16th September, 2021, “The Feeling of Nature: Ma Changli Oil Painting Art Exhibition” was launched in CAFAM. The exhibition presented more than 120 pieces of work from Ma Changli from the 1960s to today, including a series of paintings focusing on Tibet, Xinjiang, Daqing according to the need of the country in the early years of his artistic career, as well as landscape paintings in the 1980s, among others. 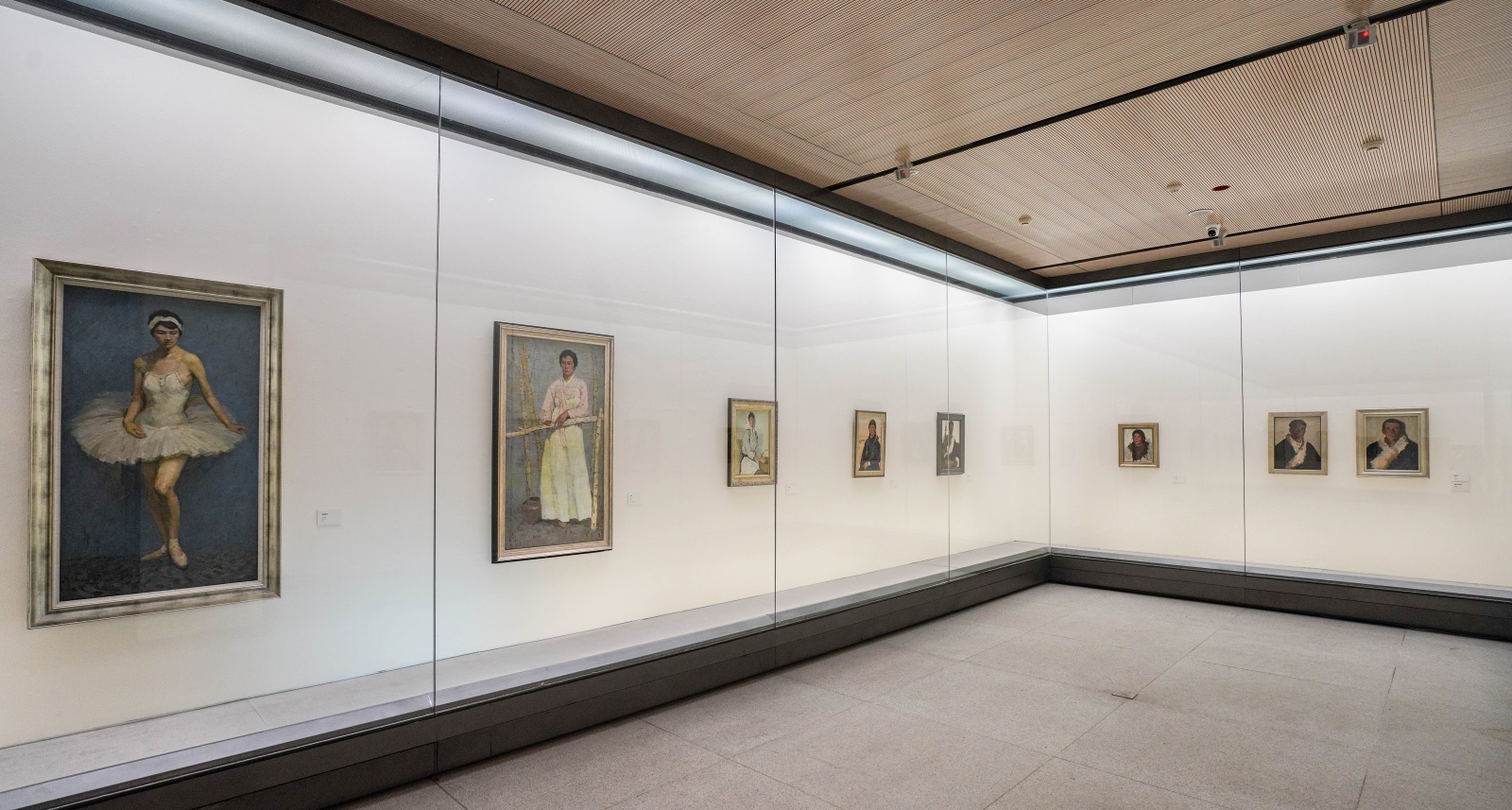 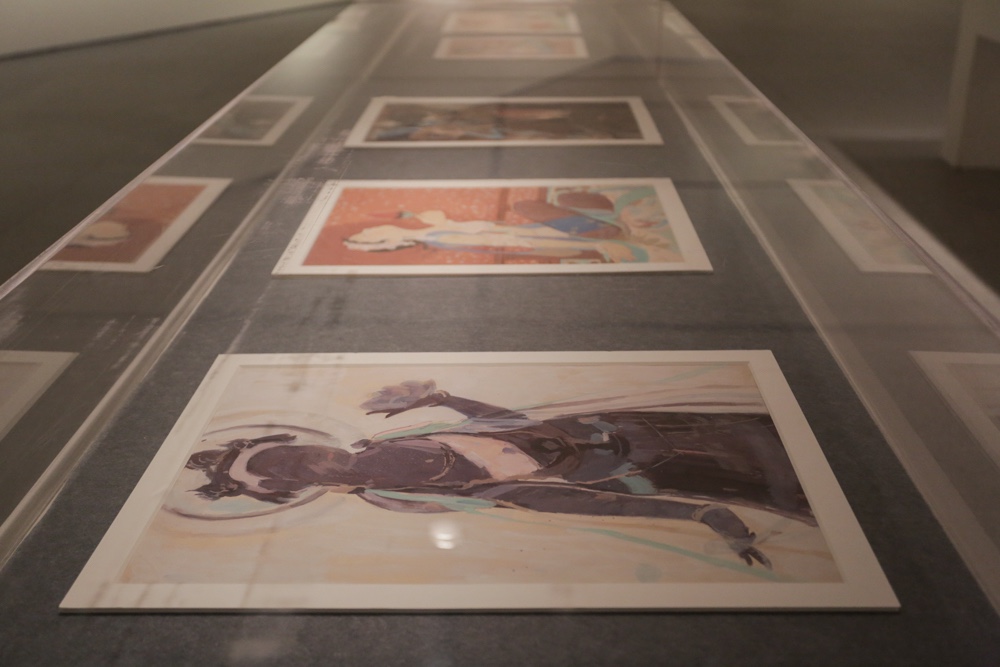 The Profile of Times and Customs

As the first group of art workers cultivated by New China, the early works of Ma Changli were naturally inscribed with the marks of the development of the country as well as the diverse customs in different places. In 1956, Ma Changli was invited by the General Political Department of the People’s Liberation Army to paint from life in Tibet in order to prepare for the art exhibition on the 30th anniversary of the founding of the army. During this period, he had an in-depth connection with people and society in Tibet, and was impressed by the purity and enthusiasm of the local people. While he also witnessed the remnants and turmoil of the old society that had more or less imprisoned the newly liberated Tibet. After this trip, he went to Barkam in Sichuan, Aba Tibetan area, Qinghai Tibetan area and other places many times to create a series of paintings featuring the Tibetan people and their lives. 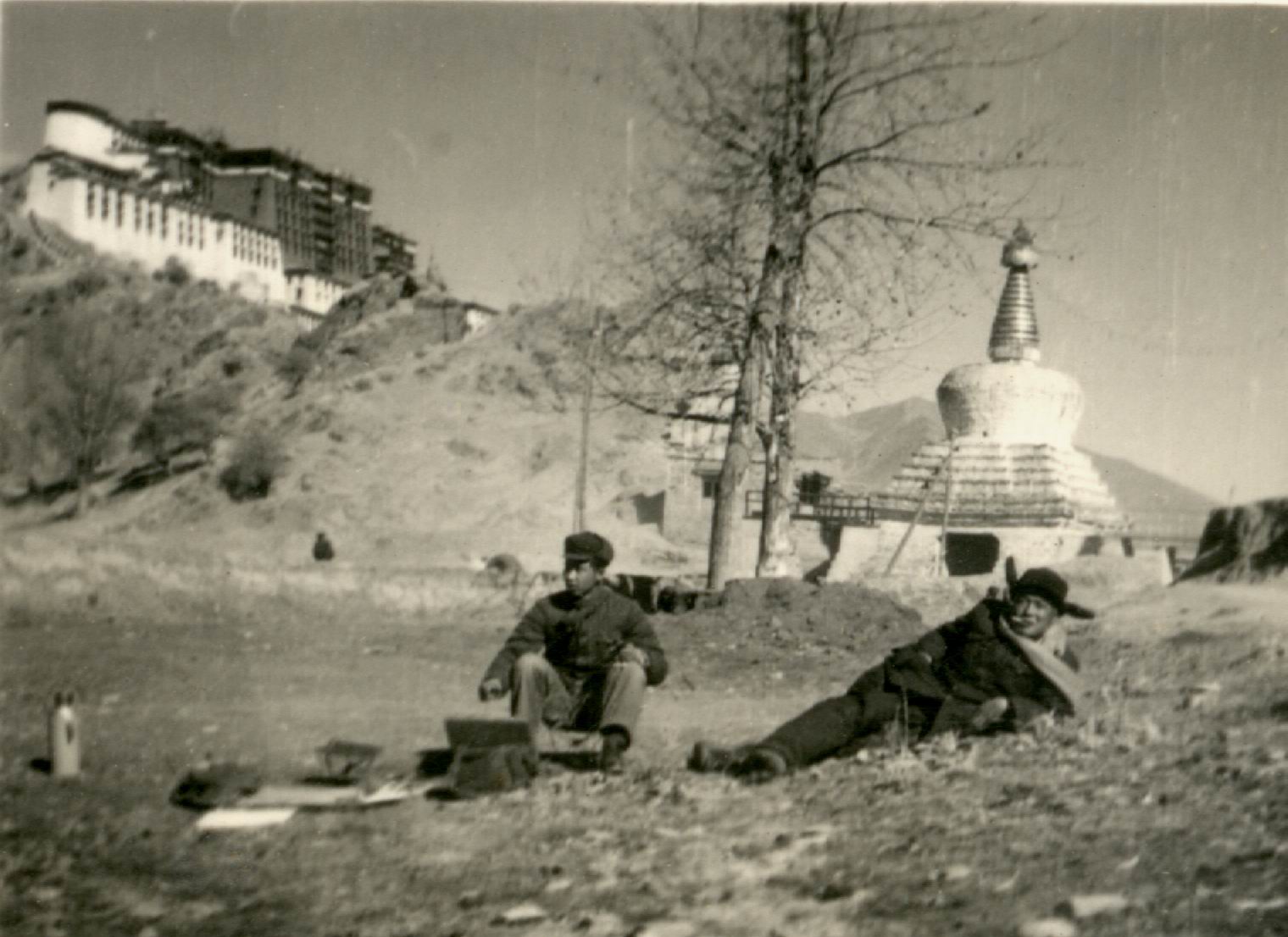 Ma Changli was painting in front of the Potala Palace in Tibet in 1956.

From a series of creations featuring Tibet, we can realize the unique perspective that Ma Changli adapted when he was confronted with the requirements and trends of thematic creation—it seems that he did not deliberately portrait the important historical characters and events themselves, but based on his personal experience regarding vivid life details he was able to interject into a period of history smoothly and accurately. By doing so, we can find fresh and true depiction of life and people in his presentation of this period. This might be the reason that Prof. Shao Dazhen commented on his thematic figure paintings as being not hidebound but full of sentiment and charm, which contain a human spirit. 3 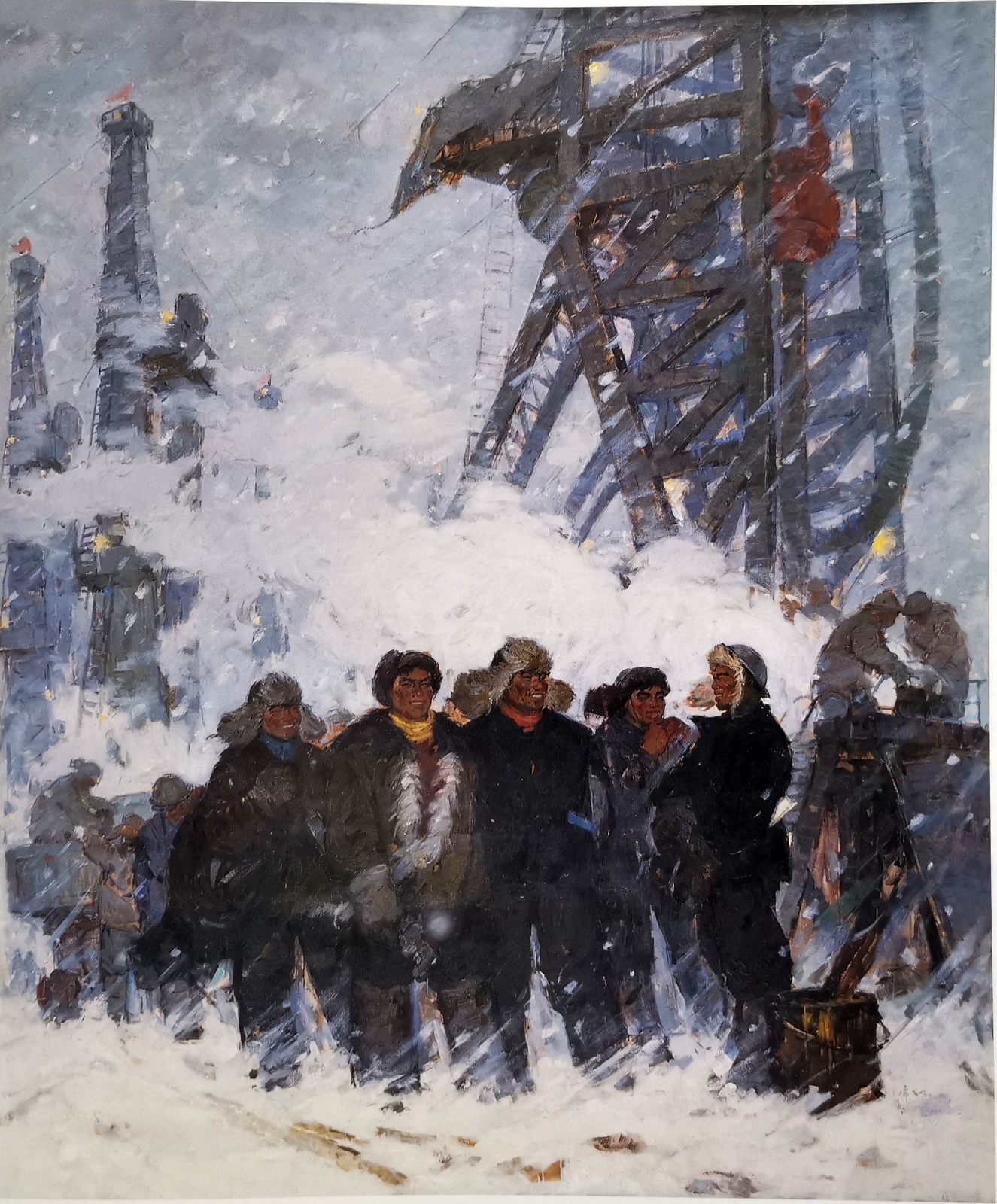 “Although many good conditions were provided for painters to create, it was hard to allow them the freedom of creation.” When talks about the perspective that Ma Changli chose regarding the thematic creation, Professor Ma Lu, the son of Ma Changli, holds the view that the common feature of this series of works is that they did not represent the most intense and representative revolutionary moments, therefore, they did not contain the typical feelings of the revolution. He recalls that his father had experienced of using the political standard as a priority in his creation, and ended up with “I could not become accustomed to the trend.” 4

After this, Ma Changli turned his experience to nature and represented his feelings of the landscape, while characters gradually disappear in his painting. It is also interesting to notice that for a long time in the last century in China, landscape painting was regarded as a foil and embellishments of thematic paintings in many exhibitions. It was in such a condition that Ma Changli chose to step into the creation of landscape painting. Obviously, he had given up on many things but carved a new route in his art career. 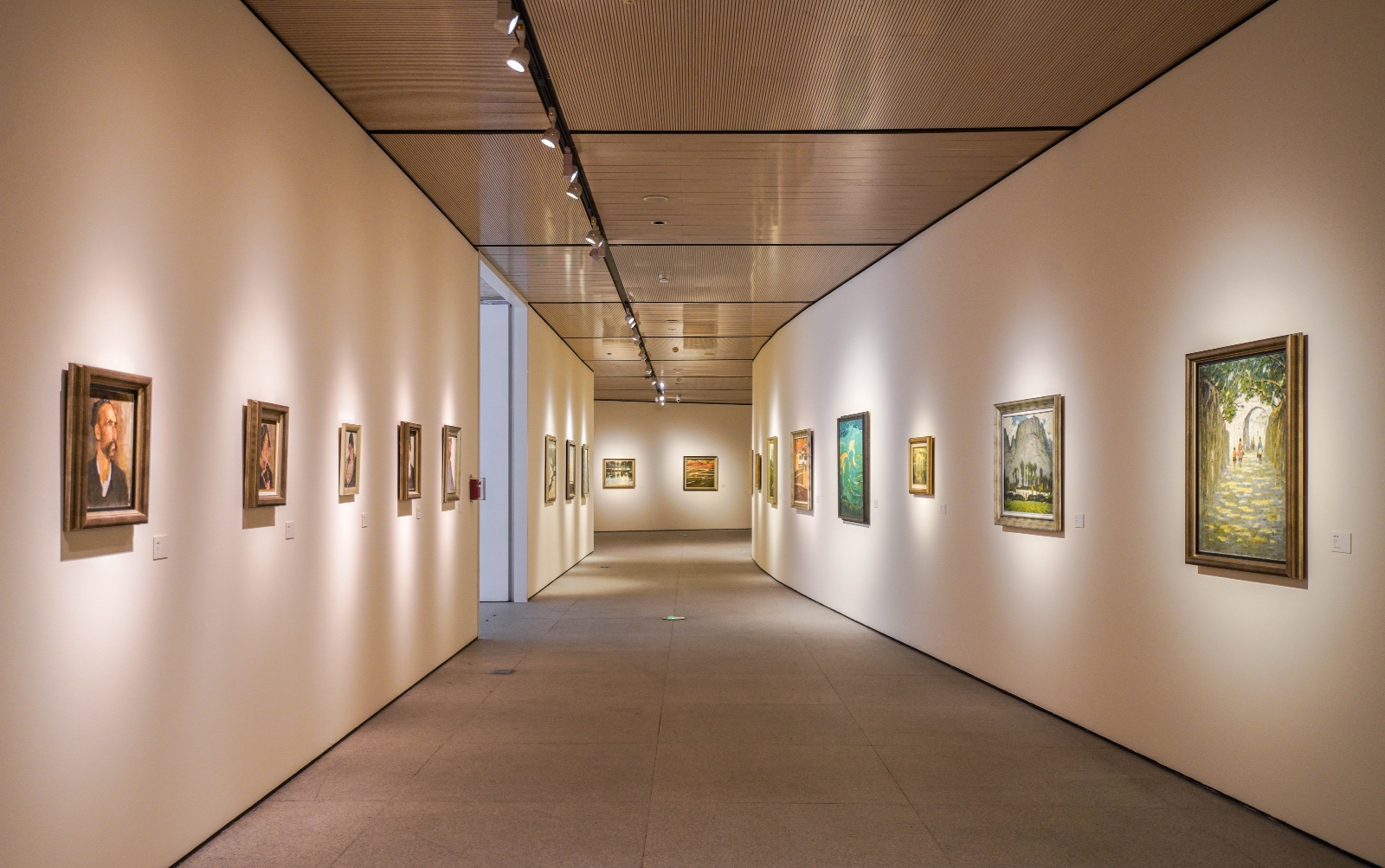 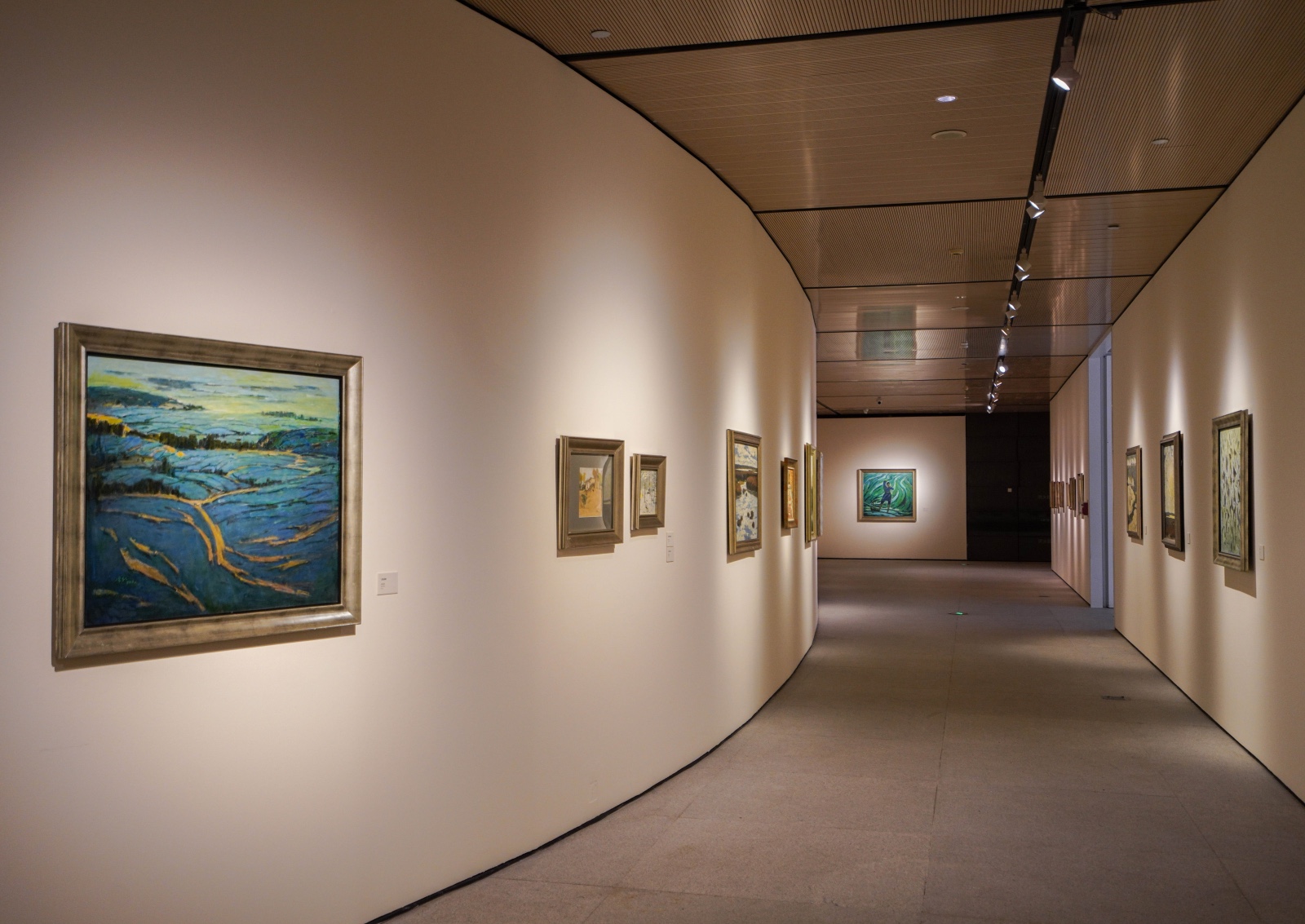 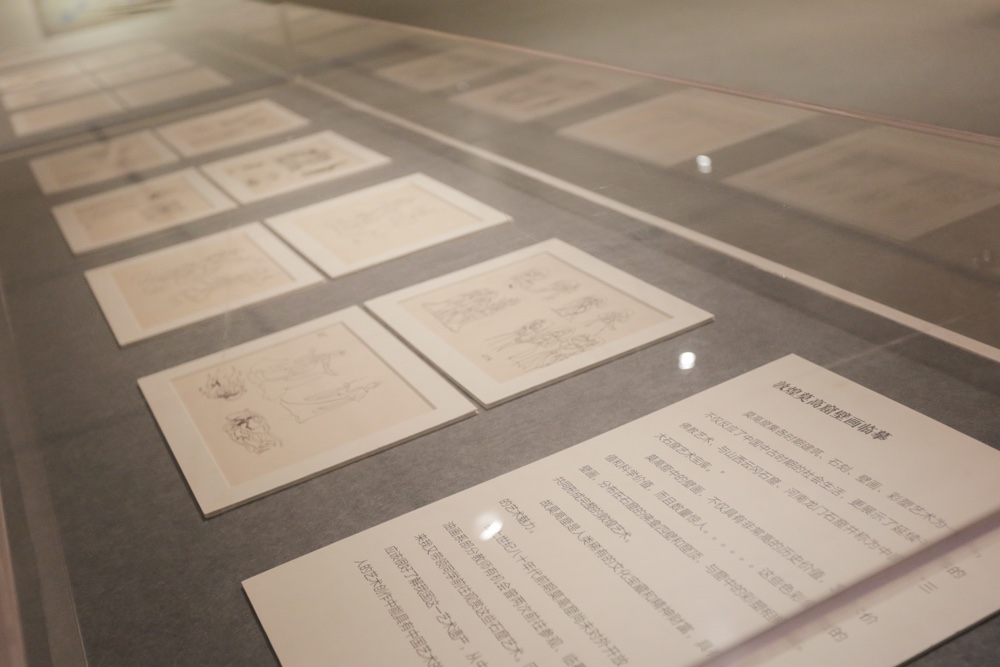 The Poem with No Words, the Song with No Voice

It is generally believed that Ma Changli began to gradually turn to pure landscape creation in the 1980s. This was also an important stage for the artist to form his own painting style and find his artistic language. In fact, in the late 1970s, the figures in Ma Changli’s paintings had begun to gradually walk off. The depiction of the different geographical landscapes of the motherland showed a rich element with his continuous exploration of the form and language of painting.

In “Harvest Season” in 1984, rather than the rough and wild brushstrokes that represented the plateau landscape, Ma Changli expressed the pleasure and warmth of the harvest season with the pulsating golden light spots and the fleet of ships full of grain. Professor Sun Meilan commented that “it was completely different from Europe, from Russia, and from Japan. It was modern and adapted to the developing national psychology.” 5 “Harvest Season” shows the harvest scenes in the region with rivers in southern China. From the perspective of the harvest theme, the main body of this painting ought to be the ships full of grain. However, the light spots and bright golden color that occupies the picture attract the viewer’s attention more than the fleet of ships. “When I am immersed in colorful nature, I am always stimulated with a creative impulse. Besides, I would like to dig beauty from the ordinary. I believe it is closer to people’s real life so that the landscape I represented might prompt the viewer’s sympathy.” 6 In Ma Changli’s Self-preface, it is clear to see his touch and harvest brought by the surging and pure natural scenery during his many years of visiting diverse landscapes in China.

The use and control of colors is usually the first thing to be noticed in Ma Changli’s landscape paintings, and it is not difficult for the viewer to perceive a connection with Impressionism. From Ma Changli’s paintings and scripts, his appreciation of the perception and grasp of natural light and color as featured in Impressionism is undisguised. 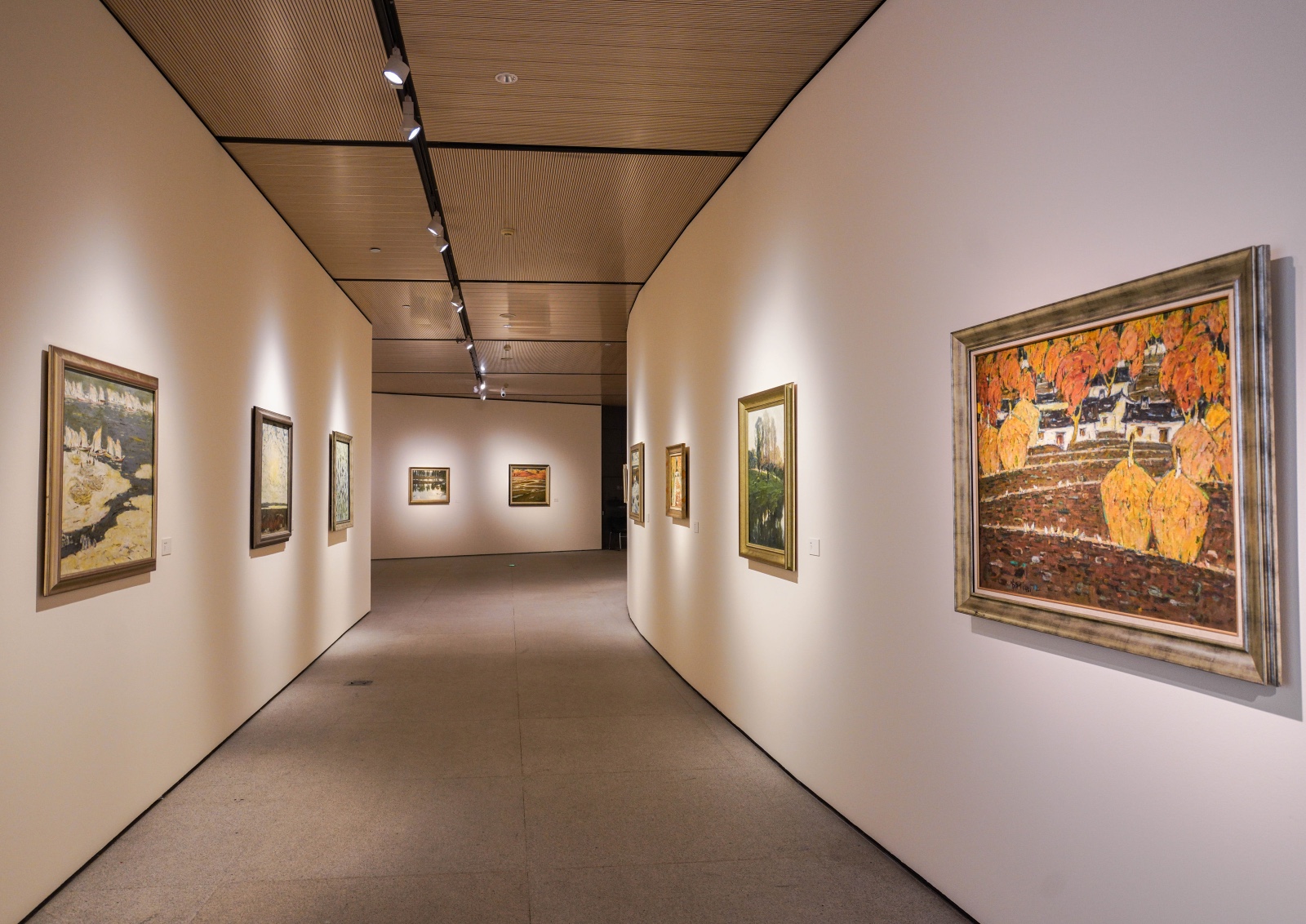 Although Ma Changli took the techniques of Impressionism as references in his landscape paintings, he did not regard the pursuit of light and color as the final purpose of art. Instead, he “tried to integrate the feature in the color of European Impressionism with the aesthetic characteristic of expressing feelings in oriental art. Therefore, an artistic style characterized by elegant and harmonious colors, unrestrained freehand brush strokes and lyrical artistic conception were gradually formed.”7

Even though Ma Changli enjoys the creation of landscape paintings, it is interesting to note that the magnificent scenery of famous mountains and rivers rarely appear in his paintings. As the artist stated, “Although famous mountains and rivers are magnificent, their beauty is far away from people’s daily life, which can hardly develop people’s sympathy. While the natural and ordinary scenes often contain a tremendous value of beauty and charm. They expect someone to explore and reveal such value.” 8 It is through his color and brushwork that Ma Changli is revealing the great beauty hidden in ordinary scenes. Usually, he immerses himself in the scenery as the first step, and then experiences the communication between nature and himself; finally, he conveys such authentic feelings through his brush. In other words, rather than the landscape itself, what Ma Changli depicts is his true feelings at the moment he confronts the scenery. By doing so, there seems to be a passage between oil paintings from the West and the artistic conception of traditional Chinese landscape paintings. How to nationalize the oil painting? It may not be about the technical methods or the painting objects, the root of culture and life, and the trace of the confluence of thoughts and spirit that counts. This is Ma Changli’s answer to the issue and the route he steps forward into. 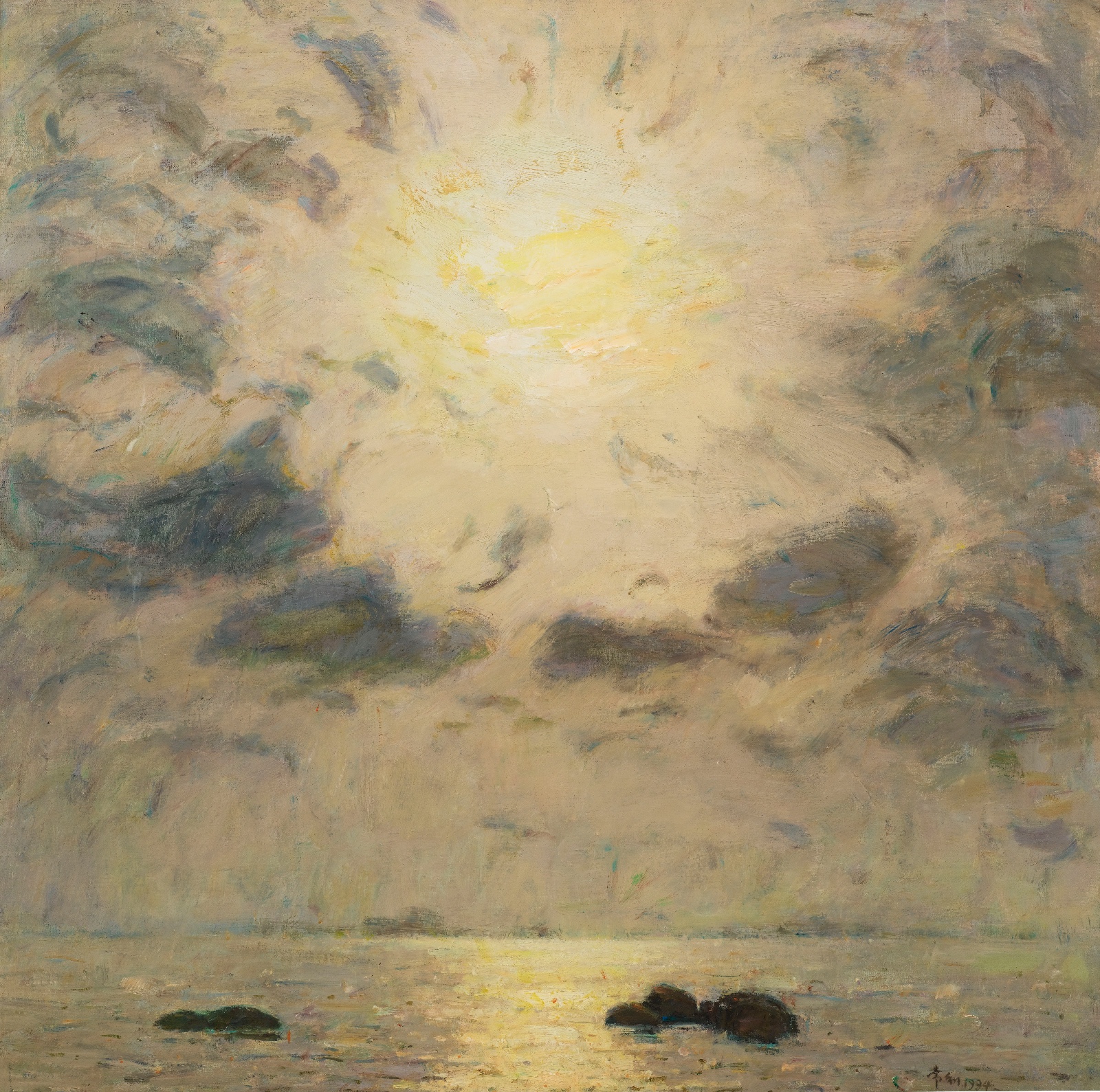 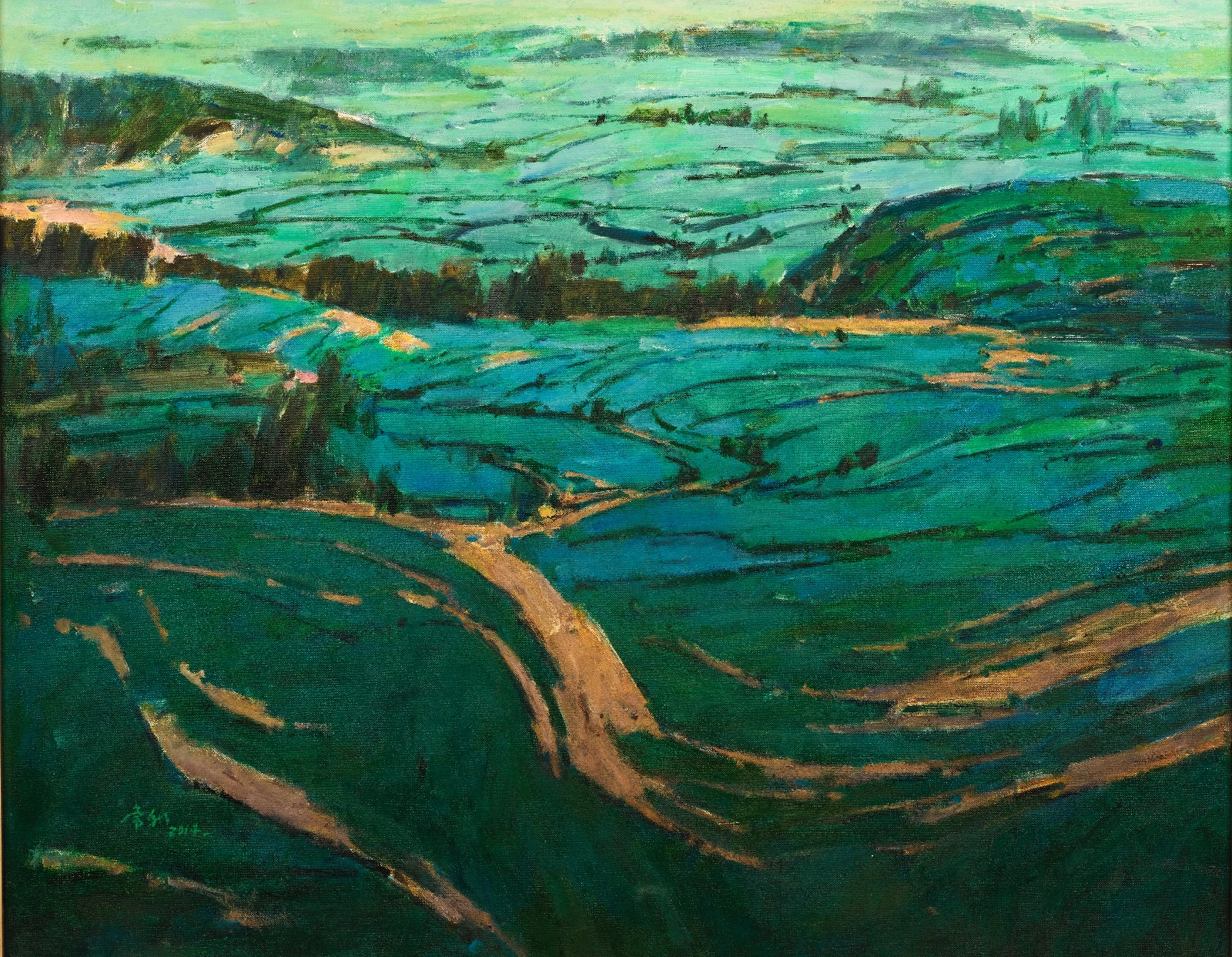 If we retrospect different stages of Ma Changli’s artistic career, it is not difficult to sort through the common direction and creative logic, which exactly coincides with the artist’s personality. Being gentle and modest, respecting others while respecting himself…these descriptions come from Ma Changli’s old friends, relatives, and students. It is his personality that shapes the perspective that he perceives the world and the times, so that there are no flatulent expressions and sharp opinions in his painting. Instead, the viewer can feel the peaceful atmosphere, endless energy and emotions through his creation, where his mentality has been deeply integrated with colors and brush strokes.

Photo by Hu Sichen and the organizer.